The Minneapolis Convention Center (MCC) announced that it is now LEED Certified for Existing Buildings: Operation & Maintenance (EBOM). The LEED rating system, developed by the U.S. Green Building Council (USGBC), is the foremost program for buildings, homes and communities that are designed, constructed, maintained and operated for improved environmental and human health performance.

“Sustainability is a priority at the Minneapolis Convention Center, and we are proud to be LEED Certified,” said Jeff Johnson, executive director 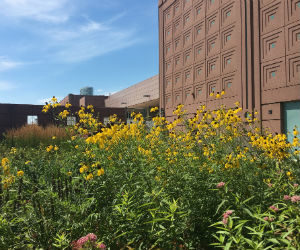 of the MCC. “It is our responsibility, not only as meetings and events leaders, but also as citizens of the world to think beyond the walls of our facility and how our actions impact the community at large.

“Take for instance the mighty Mississippi River, which flows directly through downtown Minneapolis and serves as the backbone of our community. Due to a major sustainability effort to install a 250,000 gallon storm water system, we are now diverting an estimated 5.4 million gallons of runoff rainwater annually from the river and redirecting it to our underground storage system for the facility’s irrigation.”

“We strive to use our resources responsibly at the Minneapolis Convention Center, and it became clear we needed to take bold steps to change our primary source of irrigation among other efficiency efforts,” Johnson added. “This mindset has become the cornerstone of our sustainability program and guides our efforts to be the best facility possible for our clients, our staff and the entire community.”

Examples of ongoing notable sustainability initiatives at the MCC include offsetting energy usage by 100 percent with solar and wind power, recycling 60 percent of waste in 2016, collecting 160 tons of organics for hog feed and composting, donating four tons of food per year and creating a pollinator garden.

“To further reduce the waste that is generated by meetings and conventions, it is imperative to work with an award-winning culinary partner like Kelber Catering who values sustainability,” Johnson said. “As we continue to push the needle to improve efficiencies and reduce waste, we are thrilled to have seasoned chef and Kelber veteran John Doody at the helm as our newly named executive chef.”