Moody Center, the world-class venue designed specifically for Austin, is marking a major milestone of construction with their final beam placement on the 530,000-square-foot venue. There is a total of 5,308,272 pounds of structural steel – 2,654 tons. The beam indicates the steel-framing structural phase of a project is complete. To celebrate this milestone, Moody Center hosted a Topping Out Ceremony on the morning of Tuesday, July 27. 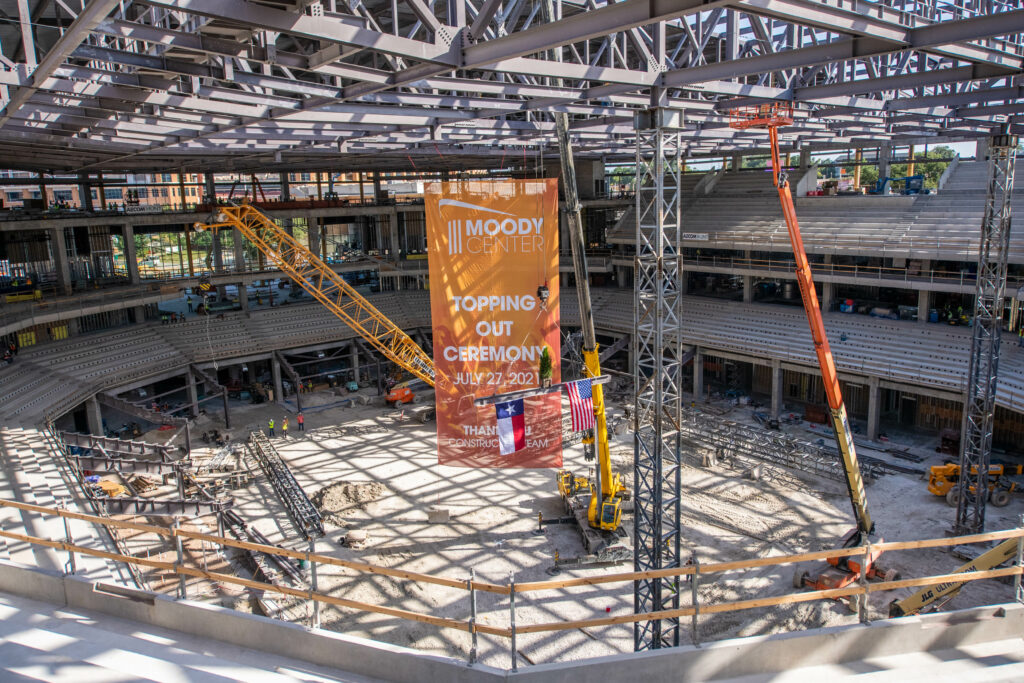 tradition behind “topping out” ceremonies. “Topping out” ceremonies on construction sites have a centuries-old history with a tree affixed to the final beam as a symbol to show no structure is taller [in spirit] than a tree. A tree stands as a talisman for good luck and prosperity for the future occupants of the building. The tree’s strong and expansive branches, which often offer shelter, symbolizes hospitality, and endurance symbolizes the important role Moody Center will play as the premier music venue in the Live Music Capital of the World and a gathering place for Austinites and visitors to enjoy.

It’s an exciting time for Moody Center,” said Jeff Nickler, General Manager of Moody Center and Senior Vice President, OVG Arena and Stadium Alliance. “The placement of the final interior steel beam marks one of our biggest moments of construction to date. This past year has been full of unprecedented events, not to mention weather challenges, and yet the women and men working on this project continue to deliver. We hold a sincere appreciation for everyone who has worked on Moody Center and can’t wait to open its doors to Austin next spring.”

The landmark occasion was commemorated when steelworkers placed the last beam on the 15,000+-seat venue in the attendance of the construction and design team and Moody Center key stakeholders. This event and the signing of the last steel beam symbolized a celebration of all the hard-working women and men who took part in constructing Moody Center over the past two years.

“The topping out ceremony is a much-earned celebration of thousands of hours of planning and hard work on the part of our outstanding tradesmen,” said Sid Perkins, Vice President of Field Operations, AECOM HUNT. “Cap Form, the concrete contractor, and Irwin Steel and Bosworth, the steel erectors, have worked numerous hours to reach this goal. This provides the starting point for other dedicated tradesmen to enclose and finish the interior of Moody Center. The tradesmen of Central Texas are dedicated and proud to complete a state-of-the-art arena to be enjoyed by all.”

Austin’s newest entertainment arena will make its debut in April 2022 and has started to announce some of the biggest acts in the world for its inaugural year including The Weeknd, Justin Bieber, John Mayer for two nights, and The Killers. Moody Center will have a massive amount of live entertainment and many more major announcements rolling out later this year.

Veronica Cantu is Vice President of Marketing at Moody Center.