My wife was legitimately camouflaged in a green t-shirt from her alma-mater, while I awkwardly tried to look the part of an alumni from a university 16x larger than the athletic-less art college I attended. Getting a game of catch to happen at my school required a full marketing campaign, and here we were walking into the buzz of tens of thousands of alumni and fans ready for a high-stakes game of college football. We walked through the glass doors of the AT&T Stadium employee entrance, one hour before the kick-off of the Texas Farm Bureau Shootout featuring (now No. 5) Baylor versus Texas Tech.

Our mission, at the generous invitation of Paul Turner, CFE, director of operations and security for AT&T Stadium, was to roam the stadium and secretly observe his team. Paul had equipped us with an employee handbook, an orientation webinar, and a copy of game-day materials used by stadium staff that provided a timeline of events, credentialing details, and a few reminders concerning customer service. 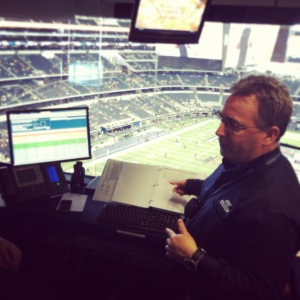 We began with Paul in his command center, where an array of camera footage, status reports, and staff communications ran across his monitors. We got a sneak-peek at an amazing new system of multi-megapixel cameras being tested in the stadium, and we saw how quickly a housekeeping request could be called-in, tracked, and resolved before affecting the guest experience anywhere in the venue.

At one point it was asked, “What about handling live mascots?”

Paul acknowledged that collegiate animals (longhorns, bears, tigers…) and weaponry (cannons, rifles…) present a few unique challenges with these types of events. They’ve learned to ask in production meetings, “Are you planning on bringing anything that poops or explodes?”

A client once responded, “Well, just our head coach.”

After our orientation with Paul, we began to wander the venue. Our credentials granted us access to most of the public spaces, so we started at one end of the bowl and slowly made our way through major clubs, sponsor lounges, and concession areas. The cleanliness of the building, every inch of it, was noticeable. My minivan and AT&T Stadium are the exact same age, but only one of them smells like crayons and has F&B residue permanently tattooed into the upholstery. Every area of the stadium was in pristine condition—even Paul’s desk.

We also kept an eye out for great moments of customer service. Overall, we felt that the staff were noticeably hospitable. A fellow IAVM colleague and mystery shopper remarked that it literally felt like 100 percent of the staff were engaging and friendly. The stadium staff was so approachable in fact, that we ended up talking to quite a few of them: 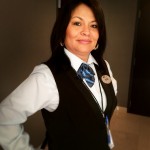 Dora, nicknamed the “Queen Attendant”, has been a suite attendant with AT&T Stadium for five years. She loves the guests in her suite and works hard to meet every expectation. A personal highlight for her was hosting Mike Rawlings (currently the mayor of Dallas, Texas) for an event. We felt obligated to thoroughly investigate Dora’s suite, and her smile throughout our visit reflected the great service and atmosphere experienced by all of her guests that day.

Russell worked the parking lot at the former Texas Stadium and has been a security supervisor at AT&T Stadium for all five years. Russell welcomed us to the stadium when we first arrived and personally escorted us to the command center when I mentioned that we would just cut across the field. When I asked Russell what great guest service means to him, he replied, “I work for you. You pay me, and if that means that I need to walk you all the way around the field, then that is fine. I just want you to experience this great stadium.” I also asked Russell about Paul, and he mentioned that Paul helps bring great attitudes out of staff members. 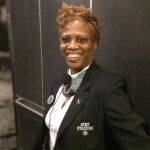 Ora was on her second day, working the elevator. Her smile was because she loves meeting people (and because her post offers a great view of the game on a nearby digital screen). “I’ll take you wherever you want to go,” was her greeting to us.

Part of our mystery shopping strategy was to ask for directions from a lot of staff members. At one point, we listened to the directions, then walked the opposite way. The stadium staff member quickly followed up with us and let us know that we were about to walk the entire circumference of Arlington to get to our destination. She kindly pointed again in the right direction, and away we went. Later on, we asked for directions to a club that was literally on the opposite end of the stadium. The staff member could sense our lack of excitement and provided a few route options that would avoid traffic and help us get there quicker. 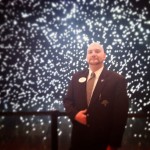 As my wife and I were leaving the stadium, I stopped to point out the LED art-installation “Exploded View” by artist Jim Campbell. When you walk by the piece, you don’t realize that the 2,000+ LED bulbs are actually playing Cowboys highlights (watch a video, then come back!). We stopped for a second, and Marty, a concierge, walked up and greeted us. He shared details about the piece and then answered a few of my questions about working at AT&T Stadium. He mentioned the chemistry of the staff, how he loves to hear people say that they have had a wonderful experience, and that he even helped get his sister onboard as a fellow concierge.

“I’ve only missed three operating days here at the stadium,” Marty said. “It was during one of those days that a guest crashed their wheelchair and got tangled in the installation!”

Marty called himself a guardian of the art, but he was equally committed to ensuring that every guest, including the “visiting team” had a great experience at AT&T Stadium. There was a phrase he used at some point during our conversation that wrapped the day of secret shopping up quite well:

“Welcome to my home.”

About the Author
Jason Judy is the Director of Marketing & Creative Services at IAVM.
Social Share
3 Comments