by R.V. Baugus
#covid-19, #edenpark, #newzealand, #nicksautner
Comments are off

Dig if you will a picture … sorry, just had to go with some Prince lyrics because, for most of the world, hosting a sporting event before a sold-out crowd of 43,000 where patrons actually sat next to each other and where technology played a major role in allowing that to happen is indeed right now just a picture.

But for Nick Sautner, Chief Executive officer of Eden Park, the picture was real when the Blues and Hurricanes 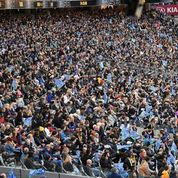 played a Super Rugby Aotearoa match before a sports-thirsty crowd on Sunday, June 14.

“We were central to the success of the rebuilding of the nation,” Sautner said in a comment that is anything but exaggeration. “People just wanted to at a part of history. Before the match the crowd impromptu stood and acknowledged and clapped the essential workers that had implemented the response to COVID-19. From an Eden Park perspective, we’re the national stadium and have been a venue for over 117 years. We have arguably been the home of some of this country’s most memorable sporting moments. We have been seen around the globe and we feel it was one of those events that people will talk about for many years to come.”

The first question you want to ask, obviously, is how was this able to be accomplished.

Sautner explained that the venue had worked with the government on a COVID code that included contact tracing along with the installation of additional sanitizing stations at all entries and food and beverage outlets. An overlay of additional cleaning ensured that high-touch surfaces were regularly cleaned throughout the venue.

“The government had also been able to perform contact tracing through a bespoke and ticketing,” Sautner said. “People had the discretion to scan their QR code in the event that there was a requirement to be contact traced. We worked with our ticketing agency Ticketmaster to ensure that we had all the information of the attendees at the fixture, but the government had declared that the country was COVID-free some four and a half days out from the fixture. We provided real confidence and comfort to the people of New Zealand that they could safely attend the park.

“The health of staff, athletes, and patrons remains our priority and our team has played a key role in developing ‘the COVID Code’ for Government. Following the move to Alert Level 1, a number of additional measures will be in place at Eden Park such as sanitizer stations, hygiene promotion signage, and additional cleaning of frequently used surfaces. The Park’s QR code will be available for those utilizing the NZ COVID Tracer App.”

Indeed, signage also played a major role throughout the venue to assist fans, many of whom likely forgot what it was like to attend a sporting event since the last event had taken place three months ago.

“We implemented a significant signage program on entry, on league doors, on bathrooms and toilets,” Sautner said. “It is just that continual reminder. We had a sanitizing station before people entered, and at food and beverage outlets. Again, it’s just providing that level of comfort.

“We worked with our caterer and felt that to give comfort to our patrons that the presentation of the outlets needed to be of high standard and arguably from a venue perspective they are.” 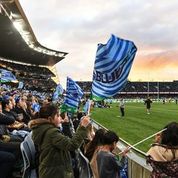 When asked about the biggest upside of the event, Sautner cited maybe the simplest thing he could — that people were actually able to come and enjoy a sporting event and the escapism that attending live events provides.

“The challenge of COVID has been with us the last three months,” he said. “Pretty much immediately all our revenues ceased. We were required to put systems into place to address that whether it be reducing our staff or our hours of operation and also eliminating redundancies.

“But coming out the other side, we’ve got a theme of Emerging Stronger, because we do feel that during lockdown people have been starved for live sports. There was no question people attended the event with family and friends and they walked away thinking this is something that we haven’t had the opportunity to experience over the lockdown and we look forward to coming again.

“So the upside for us is the failure to have live sports and entertainment and the escapism that provides so we are hopeful that irrespective of the economic climate that people will still want to attend our facility and have that escapism and bring the community together.”

It wasn’t just fans who packed the venue. A total of 3,000 staff was in place covering cleaning, catering, security, traffic management, medics, facilities, turf management, maintenance, and operations. The number of catering staff was 702, and among the food and beverage fun facts was 47,000 total beverages sold, 17,500 total meals served, and more than 10,000 portions of chips served.

Still, it was the joy on the faces of fans that stuck with Sautner as he walked the venue during the match.

“First, I do enjoy walking,” he said. “I feel privileged to be the CEO of Eden Park and proud of the team and their ability to deliver the event in such short notice. But to walk through the crowd and see the joy and happiness on the faces of families and friends … you could see that it really was a moment in time that will be remembered. The world and the country had been facing and continues to face … to be able to come to a stadium as a community to reconnect and experience that escapism that the happiness, the joy and the feedback we have seen on social media and the commentary internationally just again demonstrates why we work in the industry we do.”

Finally, Sautner spoke to the pride of the country.

“The Prime Minister in New Zealand talks about being a team of 5 million that have been able to contribute in addressing COVID-19. I spoke to the team prior to the event about how we were going to be on display to the world and we needed to be able to ensure that we did deliver the event so that gave confidence to so many that had been starved and were craving to get back in to the stadium. We came through in flying colors.”