I don’t know why, but a feeling of sadness always comes over me when a venue is used for the last time before its tenant moves on. Such was the case when the Oakland Raiders played their last game at venerable RingCentral Coliseum (forever in my heart known as the Oakland-Alameda County Coliseum) before the NFL team heads to Las Vegas in 2020.

Actually, the stadium is still home to the Oakland Athletics of Major League Baseball and hosts other events, but 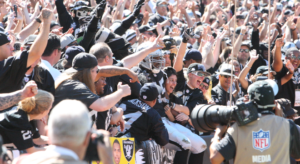 NFL football played before perhaps the most, um, rabid fans in the league is a thing of the past.

When I think of the Coliseum, I suspect that I like many of you veteran in the industry also think of our dear friend, Ray Ward, who served as the perfect maestro in directing the stadium for many years. One regret of mine is not sitting down with Ray to go over some of those stories he built in his memory bank from his days with the venue. Some of you are fortunate to know some of those stories; whether they are fit for print is another matter.

I think of some other NFL stadiums that used up their lifetime warranty, such as the Pontiac Silverdome in Detroit, which lost the Lions and for the most part sat idle for years before finally disappearing under a stick of dynamite. I think of Houston’s Astrodome, which amazingly still sits while for years the city has tried to decide what to do with the original “Eighth Wonder of the World.”

But the stadium in Oakland for some reason was dear to me, even as I grew up in Dallas. Maybe it is because the venue opened on my birth date of September 18, back in 1966. Maybe it is because I just really dug those green and gold uniforms that the A’s interchangeably wore back in the day. Maybe it is because I loved the Raiders’ black and silver uniforms before those even became cool colors to wear. I loved watching Daryle Lamonica fling footballs down the field to Fred Biletnikoff, who now has an award named after him that goes to college football’s top receiver.

I loved the team mottos of “Pride and Poise Boys” and “Commitment to Excellence.” And, of course, there was owner Al Davis and his “Just Win Baby” mantra all while wearing the most outlandish outfits this side of Elvis.

And all of this took place within the confines of the Oakland-Alameda County Coliseum.

Who knows, the team left once for Los Angeles and returned in 1995. Will history ever repeat itself in some fashion, perhaps even another team’s relocation?

Meanwhile, the Raiders’ new home, Allegiant Stadium, will sprout up at a cost of $1.9 billion with every amenity a fan could want.

Back in Oakland, the stadium that served as the last to have both a football team and baseball team play on its grass (and dirt), will have a new future itself.

Alameda County is proceeding with a sale of its half-share of the Coliseum site to the Oakland A’s, as supervisors unanimously advanced the deal.

The agreement between that has been in the works would allow Alameda County to get out of the sports facilities business, while potentially giving the A’s more influence in mapping out the site’s future. As part of their ongoing effort to build a new ballpark at the waterfront Howard Terminal site, the A’s are proposing a large-scale redevelopment of the Coliseum complex, according to Ballpark Digest.

More exact parameters of that project could take shape over time, but the A’s have released a broad vision that includes tearing down RingCentral Coliseum and replacing it with a small sports park/amphitheater, retaining Oakland Arena as an event venue, and redeveloping the surrounding the land with mixed-use amenities.

All of that is ongoing and still to be worked out. For now, the last game was played on December 15, a 20-16 loss to the Jacksonville Jaguars.