Mark Tester, who was described as someone who literally grew up in the convention industry and eventually rose 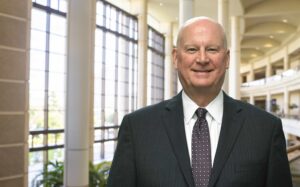 to leadership positions in Chicago and Austin, Texas, was announced as the new executive director of the Orange County Convention Center, which is the second-largest in the country behind Chicago’s McCormick Place. He will start February 10.

“I believe Mark Tester’s goals of creating high-end customer service and driving economic impact through sales and marketing aligns perfectly with my expectations for what the Orange County Convention Center can be, both now and in the future,” Demings said in a news release.

The center, which has 2 million square feet of exhibition space, has been under interim and acting leadership since late winter 2018 when Kathie Canning left the executive director’s position. For part of that period, former Mayor Teresa Jacobs held open a search for a new leader for Demings, who was elected in August 2018 and took office in December 2018.

The center is growing. Orange County has embarked on a $605 million expansion and improvement that will create a new grand concourse and a multipurpose venue that will bring the total exhibit space to 2.3 million square feet.
Tester’s father operated destination marketing organizations and later, convention and trade shows. After entering the industry himself, Tester spent 13 years working in the Chicago convention community. There he held senior positions at both the Chicago Convention and Tourism Bureau [now Choose Chicago] and the Metropolitan Pier and Exposition Authority, the owner and manager at that time of McCormick Place, the nation’s largest convention facility. In 2008 he became director of the Austin Convention Center.

“I greatly appreciate the support of Mayor Demings and the Orange County Board of County Commissioners, and look forward to working with the strong team at the OCCC,” Tester said in the release. “I have always had great admiration for the phenomenal work of the OCCC and its employees, and look forward to my role in Orlando, the nation’s premier destination for conventions.”