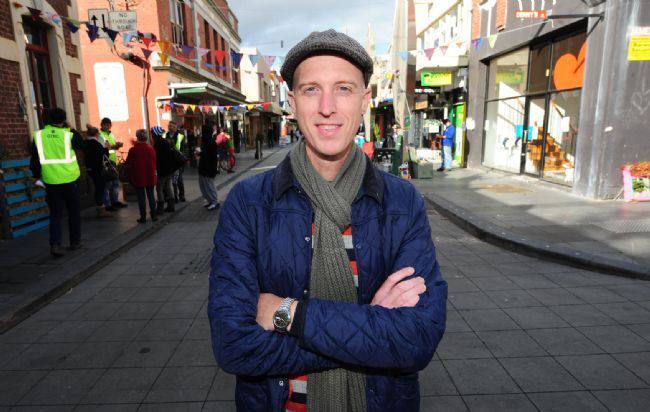 Jason Roberts is the founder of the Oak Cliff Transit Authority, originator of the Better Block project, co-founder of the Art Conspiracy and Bike Friendly Oak Cliff, and a former candidate for U.S. Congress. The Better Block project takes blighted blocks with vacant properties and converts them into temporary walkable districts with pop-up businesses, bike lanes, cafe seating, and landscaping. The project has now become an international movement, occurring everywhere from Melbourne, Australia, to Tehran, Iran, and has been featured in the New York Times, Dwell magazine, TED Talks, and National Public Radio. Robert’s consulting firm, Team Better Block, was showcased in the U.S. Pavilion at the 2012 Venice Biennale, and he will be one of the keynote speakers at the 2015 Performing Arts Managers Conference in San Francisco, February 15-17.

IAVM: Our members sometimes have to deal with city officials who do not share a love for the arts as much as our members do. How do you convince them to your side (i.e., how to you show them value that they will accept)?

Jason Roberts: This is a pretty common problem that we’re faced with when beginning projects. The problem I ran into early on was doing too much discussion and planning in order to get people to understand the concepts that I was trying to have implemented on a block project. In the end, we found it was best to have people experience our work, then make the judgement call on its value after it was put on the ground. Prior to that, people make assumptions or even come up with worst-case scenario on why something will or will not work. And in some instances, they may be right, but at the end of the day, people respond best to feelings and emotions, and with the arts, you have the opportunity to create things that people have to engage with and decide for themselves. We’ve had a lot of people that initially opposed ideas we came up with, but quickly changed their minds and even became strong allies once they experienced the work and saw for themselves how it brought communities together and created an environment that people loved to be around.

IAVM: What is the responsibility of city officials when it comes to projects that the public supports but that maybe they don’t?

JR: Good question. I’d say the responsibility for the staff or elected officials is ultimately to do the work that the community desires. The problem I’ve seen in my own community is city officials that have personal objections to projects and purposely work to slow or stop initiatives. Or worse, even help get them created but make them as weak as possible in order to prove a point. This is where you have to organize your community, demonstrate, and even rally a bit in order to fire up people to take part, put pressure on their elected officials, and keep pressure constantly in order to make sure your work comes to life. It can be exhausting, but I’ve found that I have to continue to come up with new and interesting ways to keep bringing people to the table, have them understand the value of our projects, and to keep being a squeaky wheel.

IAVM: How have you changed since starting Better Block as it relates to working to bring opposing groups together?

JR: Initially, we tried ways to build mass consensus in projects but quickly realized that many factors existed that created opposition to initiatives that were just human nature issues (e.g., personal objections, historic rivalries, strong egos). At some point, we had to find the common causes that everyone agreed were important (safety, well-being for children, job opportunities). From that standpoint, we could then begin crafting designs for public and private spaces based on ideas we found working around the world. With our projects, much of what gets built is new and potentially counter-intuitive to communities (taking away parking, thinning streets, etc.). Opposition is very normal when you’re introducing radical changes to a landscape. What we had to understand was, how we could communicate better that the work was temporary and that we really wanted to build things with the community to test and see if changing landscapes created improved social and economic conditions. Those early projects, we were far more direct with what we felt worked. With time, we evolved and were able to understand greater issues within communities and have the residents help craft changes that we helped guide with our work.

IAVM: What are two takeaways that attendees of your talk can immediately use as leaders in their venues?

JR: First of all, you don’t have to be the expert when you’re getting started. I knew things were broken and didn’t necessarily know what needed to be fixed or how to repair them, but I knew we just need to begin working. From those early stakes in the ground, I was able to see how our projects effected change and study that work and improve my own understanding of how communities thrive. Second is to realize that most “leaders” don’t feel like they are truly leaders. What I found is that if you’re passionate about something, you really have all that’s necessary to become a leader. That passion is picked up by communities, and they will help you bring your ideas to life.

Registration is open for the 2015 Performing Arts Managers Conference. See you San Francisco!