PepsiCo and Hollywood Park are partnering in an expansive agreement that makes Pepsi and Frito-Lay the exclusive soft drink and salty snacks partners across SoFi Stadium and Hollywood Park, a move that further deepens PepsiCo’s affiliation with sports and entertainment in California. The partnership, which extends across the Los Angeles Chargers and Los Angeles Rams, will put PepsiCo front and center of the highly anticipated destination in Inglewood, where it will serve its signature brands to millions of fans across all events.

Opening July 2020, SoFi Stadium, the future home of the Chargers and Rams, is located at Hollywood Park, a 298- 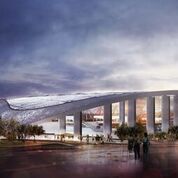 acre global sports and entertainment destination being developed by Los Angeles Rams Owner/Chairman E. Stanley Kroenke. Adjacent to the stadium and under the same roof canopy is the 2.5-acre American Airlines Plaza and a 6,000-seat performance venue, which will hold a variety of events throughout the year, including esports, award shows, concerts and more. The mixed-use development will also feature a mix of residential, retail, and commercial spaces, as well as more than 20 acres of parkland for the community to enjoy.

“For more than 84 years, PepsiCo has been a part of the fabric of Los Angeles, and we couldn’t be more excited that a development like Hollywood Park will be opening in our backyard,” said Kris Licht, president of PepsiCo Beverages North America West Division. “What Stan Kroenke is developing with SoFi Stadium and Hollywood Park will combine everything we could want in a sports, music and entertainment destination, and we look forward to offering our refreshing beverages, delicious snacks and unforgettable experiences in what is bound to become the most talked about location in Los Angeles.”

As a founding partner of Hollywood Park, PepsiCo will gain category-exclusive marketing, sponsorship and promotional rights across the development, as well as certain soft drink and snacking rights for SoFi Stadium, the performance venue and American Airlines Plaza. PepsiCo’s Frito-Lay division will lead the snacking experience with brands that could include Tostitos, the Official Chip & Dip of the NFL. In addition, PepsiCo will host a 46,000-square-foot space in the stadium’s south zone, where fans can experience a series of culinary and entertainment activations.

“PepsiCo is an iconic brand that is synonymous with excellence and creating some of the world’s greatest entertainment, from discovering up-and-coming artists to producing celebrated Super Bowl halftime performances,” said Jason Gannon, managing director, SoFi Stadium and Hollywood Park. “PepsiCo’s fan-first approach to entertainment aligns with our goal to deliver a new global stage that will host world-renowned acts and events. SoFi Stadium is already home to Super Bowl LVI and the Opening and Closing Ceremonies of the 2028 Olympic Games, and we are excited to partner with PepsiCo to continue to add to the extraordinary experiences that are coming to Los Angeles when we open in July 2020.”

This partnership will further align PepsiCo with the NFL and its two home teams in Los Angeles. PepsiCo will gain sponsorship, soft drink and certain snacking rights to the Rams, a recent partner of the brand, and the Chargers, a longstanding PepsiCo partner for the past 15 years.

“PepsiCo has been a tremendous partner to the Chargers for the better part of two decades,” said A.G. Spanos, Los Angeles Chargers president of Business Operations. “As we move into our new SoFi Stadium home in 2020, it’s nice to have a member of the family joining us. More importantly, through first-hand experience, it’s exciting to know that we have a world-class partner in PepsiCo who is aligned with our belief that the fan comes first in everything we do.”