By Bonnie Goodman for Live Arts Centers of North America

Responding to the challenges of structural racism in performing arts institutions across the U.S. and Canada, Live Arts Centers of North America (LACNA), a coalition of more than 50 of the largest performing arts centers in both countries, and the LACNA Foundation announced the launch of the BIPOC Executive Leadership in the Arts Program. Supported by AMS Planning & Research Corporation, NAS, and Stanford University, this first-of-its-kind program is designed to accelerate the development of management and leadership skills among qualified mid-career BIPOC professionals and provide them with a pathway to pursue executive positions in the two nations’ most significant cultural institutions.

The BIPOC Executive Leadership in the Arts Program supports the growth of future C-suite executives including chief executive officers, chief operating officers, chief financial officers and chief advancement/chief development officers. According to the LACNA Foundation, while 53% of principal administrators of major performing arts centers are female, only 7% of the leaders of these arts organizations are BIPOC, and only 16% of the leadership teams of these organizations include BIPOC representation. The BIPOC Executive Leadership in the Arts Program tackles this challenge head-on as a statement of commitment from these organizations to change their cultures and to diversify their leadership. The program will help recognize and support the myriad qualified BIPOC arts professionals who are viable candidates for senior roles positions and strengthen their capacities to lead large civic cultural organizations into the future.

“Leaders of performing arts centers understand that the immense public investment in these institutions compels them to operate as deeply relevant organizations that reflect and matter to the communities they serve,” said Josephine Ramirez, executive vice president, The Music Center, and co-chair of the BIPOC Executive Leadership in the Arts Steering Committee. “This work will be transformative as we find and support changemakers who have the vision, energy and determination to reimagine and lead.”

“Systemic racism affects who and how we hire, and demographic representation of executive-level staff does not yet reflect the communities we work in,” said Kendra Ingram, CEO of Marcus Performing Arts Center, co-chair of the BIPOC Executive Leadership in the Arts Steering Committee, and chair of the LACNA Foundation. “While this program won’t provide all the solutions, it is a critically important step for the arts as we move towards an inclusive future for performing arts centers.”

In the beta year for this program, the LACNA Foundation named six inaugural fellows who were nominated by performing arts centers’ CEOs. Eligible candidates must be BIPOC with 10-15 years’ experience working in the arts field, with those interested in CEO positions spending at least five of those years working at a performing arts center. All must have some management experience. The selected fellows are: 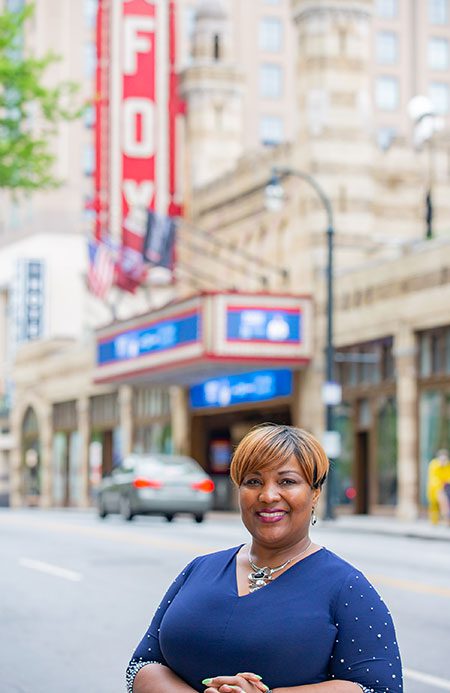 
Fellows will benefit from a multifaceted and experienced-based curriculum with five interlocking components: training on leadership theory and practice, residencies-in-practice at participating performing arts centers, one-on-one leadership coaching, networking opportunities and participation in a leadership summit. Throughout the program, the fellows will explore ways to transform anchor performing arts organizations to become more equitable, diverse, inclusive, accessible and reflective of the communities they serve. They will participate in workshops with Stanford faculty and engage with leadership of Stanford’s Institute for Diversity in the Arts, as well as its performing arts presenting organization, Stanford Live. Each fellow will work with a dedicated coach from NAS, which has created a first-of-its-kind cohort of coaches who are arts and culture leaders themselves and have the lived experience needed to support clients working to redefine the structures, practices, and policies of the status quo; the fellows will also have direct access to performing arts center CEOs in both the U.S. and Canada. Each will also receive a stipend to support their continued professional development once the program concludes.

Fellows will participate in residencies at 18 performing arts centers including:

Seed project funding for the program is provided by the performing arts centers themselves with additional support from Pivotal Ventures, a Melinda French Gates company, and The Ralph M. Parsons Foundation. NAS will evaluate the program in its beta year; feedback from participants will also inform the evolution of the program for future years.

For more information about the BIPOC Executive Leadership Program in the Arts, visit performingartscenters.org

Bonnie Goodman is with the Live Arts Centers of North America.