Pollstar 2014: How to Make Sure A Tour Loves Your Venue

by Jason Judy
Back of house, backstage, customer service, load-in, nashville, Pollstar, tour
Comments are off 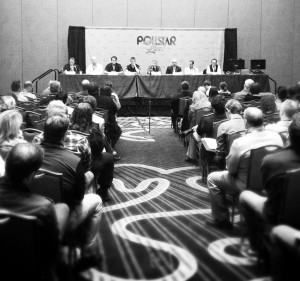 
Venue managers and tour professionals took over the mics for an IAVM sponsored back-of-house discussion at PollStar 2014. Moderated by Scott Johnson (Greensboro Coliseum, North Carolina), the panel dug into venue selection, day of show dynamics, and what a tour looks for to build confidence for future visits. Here are a few highlights:

The general consensus of the tour pros was market saturation. Patrick McDill (LiveNation) said that going to a city too many times was the top issue. Doug Aitken (Borman Entertainment) reinforced this as a top priority, urging venue managers to “know their market” and the show calendar for other venues in and around their city.

Past experiences were also mentioned as a strong factor in deciding where to send a tour. Aaron Tannenbaum (CAA) mentioned that he needs to feel comfortable sending a client to a venue, and that is influenced by previous experiences there. When asked how a venue can overcome a bad show, the conversation shifted toward the major pain points that lead to a rough show in the first place.

From having one clear point of contact to knowing well in advance the exact details of a venue’s loading and rigging capabilities, members of the panel repeatedly stressed how crucial good, honest communication is. Pete Healey (production manager, Luke Bryan), described the toll it takes on the crew to arrive at a venue after little sleep, only to discover that the load-in is going to take twice as long as planned due to limited docks or a lack of needed forklifts.

“If your venue has a rough load-in … tell us in advance,” Healey urged.

“I appreciate seeing the general manager early on the day of the show, because everyone tends to follow their lead. Smiling faces and a willing attitude make us look forward to being there, and to coming back.”

Emphasis was also placed on that first interaction between the tour crew and the venue team. McDill mentioned that it’s the early morning experience that tells him how the day will go.

Jan Eric Volz (tour manager, Rascal Flatts) felt similarly, mentioning that, “I appreciate seeing the general manager early on the day of the show, because everyone tends to follow their lead. Smiling faces and a willing attitude make us look forward to being there and to coming back.”

Even towels were mentioned (more than once) as an important detail to a crew that is living on the road.

“We roll out of our bunks, and we’re immediately at work. A nice shower goes a long way,” said Mike McGrath (tour accountant, Blake Shelton).

“Your venue is not just a name and city on a piece of paper. When something doesn’t go right, it affects us personally. A bad shower, slow Internet, these things matter,” McDill said.

When I recounted the session to Michael Marion, CFE (Verizon Arena, Arkansas) later that day, he nodded and mentioned a Dippin’ Dots station that they placed backstage at the Verizon Arena—free for the tour crew. In a subsequent Pollstar session that Marion participated in, he reinforced the importance of a great experience for the artist and crew back-of-house in more direct terms, commenting that “there is nobody in New York or Nashville thinking their career is over if they don’t play Little Rock.”

Small details and the need for great service back-of-house came up all throughout the packed session (standing-room only by the end), a reminder that the audience coming into a venue isn’t just the one out in front of the stage. And while the session largely avoided heavier issues like settlements, cancellations, and personnel conflict (one venue professional in front of me turned to his neighbor and said, “They keep emphasizing the goofy shit?!”), it was a good reminder that excellent service from the venue goes a long way in building confidence that a great show is going to happen that day—and hopefully for many future days to come.

Do you have Dippin’ Dots backstage? What else do you see going a long way to deliver a great back-of-house experience? If your an IAVM member, we’re also talking about this in VenueNet!