Populous-Designed Florida Ballpark at Alfred A. McKethan Field at the University of Florida Opens for 2021 Season

Florida Ballpark at Alfred A. McKethan Field in Gainesville, Fla., designed by Populous, recently debuted its enhanced player and fan experience. The new ballpark replaces McKethan Stadium which opened in 1949 and hosted its last game in 2020. The $65 million ballpark is prominently located on the southwest part of campus, at the intersection of Museum Drive and Hull Road. The Gators, the unanimous preseason No. 1 in all recognized collegiate baseball polls, open the 2021 season with a three-game series against the University of Miami. 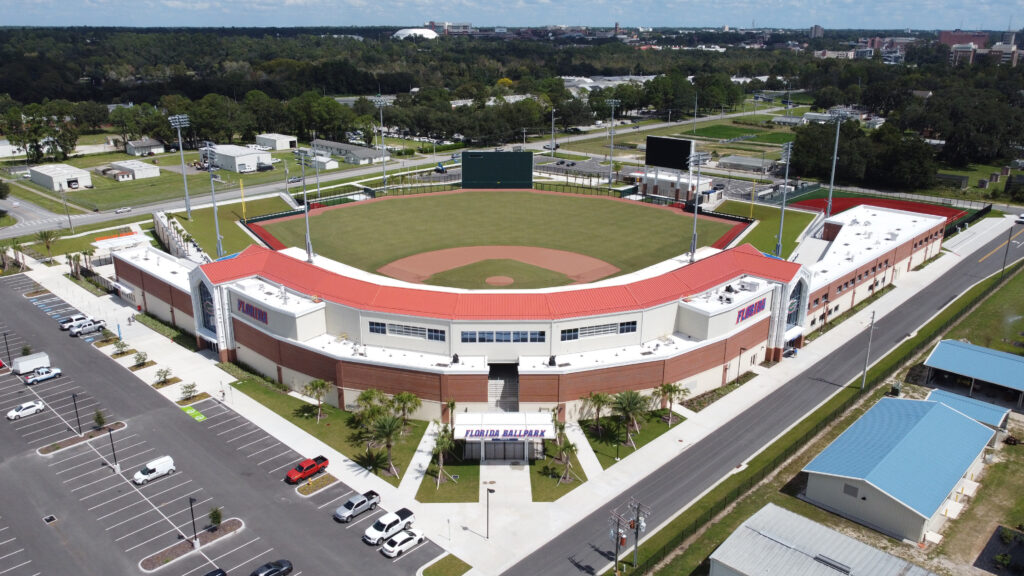 Florida campus. Designed with a variety of seating types and viewing areas, the ballpark allows fans 360-degree access around the venue without losing sight of the field and features a tiered seating bowl allowing fans to be closer to the action. In total, Florida Ballpark can accommodate 7,000 fans across 3,400 lower bowl chair backs, 800 club seats, two grass berms with capacity for 2,800 people, as well as an open concourse. The berms are located down the left and right field lines and wrap around both outfield foul poles.

Florida Ballpark was designed for maximum fan comfort. The ballpark is situated on the site to maximize shading throughout the seating bowl while shade canopies wrap the lower and upper seating bowl. Ceiling fans throughout the concourse also protect guests and staff from the hot Florida sun, offering an improved, comfortable game day experience. In addition to an open club space, the view level includes two suites and a party deck. From these seats, fans can see the football stadium off in the distance.

Populous created social areas in and around the outfield where fans can experience additional seating options in the Dizney Grove which is situated at field level just beyond the outfield wall with views back to the field. Among the Adirondack chairs and palm trees, fans will have access to a variety of concessions and food trucks throughout the season. This fun, relaxed zone offers an additional area for fans to congregate and watch the game.

“The Florida Ballpark at Alfred A. McKethan Field was designed to change the experience for our future, current and former student-athletes, staff and fans,” said University of Florida Athletic Director Scott Stricklin. “Our baseball program will enjoy state-of-the-art student-athlete and staff amenities, while more fans will be able to enjoy the game in a more intimate setting, with shade structure and multiple seating and game experience options within the 360-degree concourse layout. We are excited about the memories that await both our players and fans in the new ballpark.”

In addition to having first-class fan amenities, the ballpark is also the year-round home to Florida Baseball and was designed for the student-athlete. The elite training areas feature four indoor hitting cages, two indoor pitching tunnels, a full-size artificial turf infield, hydrotherapy and athletic training spaces. A new 1,400-square-foot player lounge features a Gatorade nutrition station and is located next to the locker room which has direct access to the field. The ballpark features some of the largest dugouts in the NCAA and has separate meeting and video rooms. The bullpens include covered bench areas for both the home and visiting teams. Coaches’ offices overlook the field and are located along the main concourse.

“The new Florida Ballpark is a game changer and what you expect a successful program like the University of Florida to call home. The ballpark’s focus is on the student-athlete, providing state-of-the-art amenities to train and perform at the highest level,” said Jason Ford, senior architect and associate principal at Populous. “Gator fans will also enjoy a variety of seating options including chairback and berm seating, all with socializing opportunities, direct views to the field and most importantly shade provided throughout.”