by R.V. Baugus
#allegiant, #lasvegas, #raiders, NFL
Comments are off

Las Vegas-based travel company Allegiant has secured naming rights to the new stadium being built in the city for soon-to-move Oakland Raiders.

The team is still some one year away from relocating from the Bay Area to Vegas, but the deal gives the team the 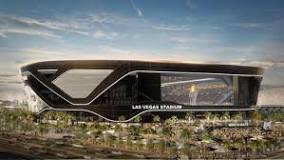 opportunity to market even better the venue and ballclub.

“We’re thrilled that our future home will be known as Allegiant Stadium,” Raiders President Marc Badain commented on the team’s website. “As the hometown airline, Allegiant is the perfect partner to showcase the incredible support we continue to receive from the Southern Nevada community. We are grateful to all involved who worked diligently to make Allegiant Stadium a reality.”

As with all naming rights deals, look for Allegiant to be prominent throughout the 1.75 million-square-foot, state-of-the-art domed stadium. Both the Raiders and Allegiant will have their name attached to a number of high-profile events set to come at the stadium, which will serve as the site of the Las Vegas Bowl in 2020 and beyond and will host the 2020 and 2021 Pac-12 Football Championship Game.

The team was approved to move in March 2017 and will featured on the upcoming Hard Knocks program that each year follows a different NFL team throughout training camp.