Exactly What Are Your Guests Doing? 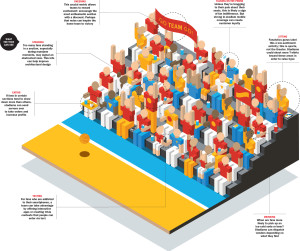 Illustration by Thomas Porostocky for TIME

New technology that provides real-time analytics of crowd behavior made its debut at the MIT Sloan Sports Analytics Conference earlier this month. Named as one of TIME Magazine’s 10 Ideas That Make A Difference, the software is able to instantly scan an event crowd to identify major behaviors (cheering, using a mobile device, staring at media screens…), providing valuable, accurate data back to venues craving such precise feedback.

From a marketing standpoint, TIME writer Sean Gregory points out that “a company can measure, for example, how many eyeballs are attached to the Jumbotron ad (are fans looking?) and how well it’s being received (are they laughing? smiling? fiddling on their phones and ignoring it?).”

Powerful insight into your guest experiences, and a helpful way to decide where to aim those t-shirt cannons. Read the full story over at TIME Magazine.