by R.V. Baugus
#renasantconventioncenter, Memphis
Comments are off

With the Convention Center’s marquee position along the Memphis riverfront, the naming rights partnership 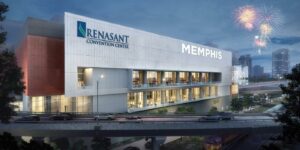 provides Renasant with bold visibility on the city’s skyline and numerous touch points that will connect its brand with the greater Memphis community. Currently undergoing a top-to-bottom $200 million renovation, the Renasant Convention Center is expected to be fully reopened in Fall 2020.

“We are very excited to show our commitment to being a strong partner with the City of Memphis through our Renasant Convention Center naming rights agreement,” said Renasant President and CEO, Mitch Waycaster. “While putting our name on the convention center is a tremendous regional identification move for our company, this is much deeper than just naming rights. We look to be an involved and active partner with the City and region through both community and economic development as well as banking and lending services.”

The naming rights agreement provides guaranteed revenue for the City-owned building. After the renovations are complete, Renasant’s logo will feature prominently on the exterior of the facility, complementing the all new glass and paneled façade.

“Any big project requires great partners, and we definitely have one in Renasant Bank,” Mayor Jim Strickland said. “They see the vision and the momentum we have in our city and want to play a major role in our future. The Renasant Convention Center will be a building that Memphians can be proud of and visitors won’t want to leave.”

Also commenting on the announcement, Renasant Memphis President, Dan Reid, said, “We believe the Renasant Convention Center will complement our strong presence of eight banking locations serving the greater Memphis area. We look forward to a great partnership with the City as we move forward together in the continued revitalization of downtown Memphis.”

The City of Memphis and the Memphis Convention Center Board of Commissioners engaged Impression Sports & Entertainment to explore and broker a naming rights partner for the meetings and convention facility in December 2018. The company identified Renasant Bank, with assets of approximately $13 billion and more than 190 banking, mortgage, financial services and insurance offices in Mississippi, Tennessee, Alabama, Georgia and Florida, as a natural fit for this premier placement within the Memphis market.

“This partnership with Renasant Bank demonstrates the innovation and significant enhancements that we have planned for the convention center,” said Kevin Kane, President & CEO of Memphis Tourism. “So much more than a renovation, the transformation of our City’s meetings facility will aid us in sustaining and growing the tourism and hospitality industry’s impressive annual economic impact.”

When complete by Fall 2020, the Memphis Convention Center renovation will feature enhancements including a grand new entrance, high-end finishes and floor-to-ceiling windows that treat visitors to natural light and stunning river views. Other features will include a column free 118,000-square-foot main exhibit hall, a new exterior concourse and pre-function space, 46 breakout rooms, and a 28,000-square foot ballroom to host smaller events.
The renovation will also include public art, digital wayfinding, and additional loading docks for easier load in and load out. This game-changing project is being funded through the hotel/motel tax and Tourism Development Zone (TDZ) funds. The Memphis Convention Center and the adjoining Cannon Center will remain open and continue to host a limited scope of events during the renovation.