Clifford “Rip” Rippetoe, president and chief executive officer of the San Diego Convention Center, was recently honored as the inaugural winner of the “Catalyst for Change” at the Women of Influence Awards. This first-of-its-kind award “recognizes a man who has shown by deed, actions and accomplishments the advancement of other businesswomen and has a track record of success and accomplishments by mentoring and/or supporting women in their profession, industry or enterprise.”

Rip’s executive team at the San Diego Convention Center is led by a diverse group of professionals, the majority of whom are women including Executive 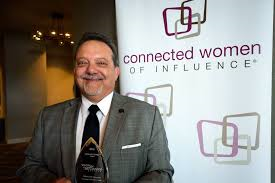 IAVM congratulates Rip for his work at the venue, in the community, and in serving as a true catalyst for change!