To get your customers to show up at your arena and open their wallets, there is first the little matter of getting them to invest with their time. It’s a jungle out there, and one that marketing, branding, and creativity expert Ron Tite knows too well.

Tite, found and CEO of Church & State, a content marketing agency based in Toronto, will speak on the topic of “How to Thrive in the Expression Economy” during the Arena Track at VenueConnect on Tuesday, July 24, from 10:45-11:30 am. 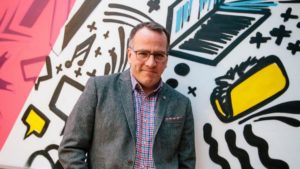 Addressing a variety of topics surrounding branding, corporate strategy, creativity, content, and social media, Tite’s presentations are not only information-packed, they’re also infused with his unique humour–guaranteed to have you laughing while you learn. It is that expertise that should connect Tite quite well to his VenueConnect audience.

“I spent 15 years as a touring comedian and producer,” Tite said. “Now I do 70 speeches a year all over the world so I’ve seen more venues in more towns than even I would care to admit. You know those horrible green rooms we’ve all heard about? Yup. I’ve been in all of them. I know what performers want and need for a successful show. More importantly, I’ve helped global brands create a face to face experience that creates a show worth seeing. At the end of the day, we all want (and need) to be heard. Just because we say it, doesn’t mean they’ll hear it. I’ve helped the world’s most respected brands and people win the battle for time.”

Tite went on to identify some concrete challenges that exist.

“Low production costs, easy distribution, and suddenly, everyone’s a creator,” he said. “Consumers can now fill their day with content dedicated to their hobbies, passions, and the things that interest them most. For business, that’s a problem. Consumers used to vote with their wallets. Now, they vote with their time. And you know who’s winning the battle for time? Other consumers. Right now, your customers are more creative than you are. They’re more innovative than you are. They’re more authentic than you are. Often, they’re even more helpful than you are.

“In the battle for time, your competition isn’t the category leader–it’s the consumers. It doesn’t matter if you’re selling a product, pitching a new idea, or trying to get a raise, your biggest challenge is getting a customer to willingly give you the time to do it.”

Before an edge of despair sets in, Tite said that attendees at his session will instead return home more energized and action-ready than before.

Tite does his own personal education survey about the public assembly venue industry and sees where he can make a difference with his personal toolbox of skills.

“Usually, I want to know what industry morale is like,” he said. “I think that’s a pretty good indicator of how business is. I like to immerse myself – but as an outsider. The strength of bringing someone from outside the industry is that you get a completely fresh perspective. So it’s doing enough research to be informed but not enough that you lose the outsider’s view.”

Expect to also have some belly laughs at the session and enjoy the elixir that comes from Tite’s comedy background.

“I was trained at Toronto’s legendary Second City,” he said about his career, which also includes producing and hosting a show called “Monkey Toast” for five years. “After performing a one-man play, I was caught in a hotel fire and had to be pulled from a 5th floor window. The next day, the headline in the paper read, “Fire no laughing matter for comedian.”