by R.V. Baugus
#coronavirus, #forsythbarrstadium, #newzealand
Comments are off

Thousands of fans celebrated their return to stadiums as New Zealand held its first top-level rugby match after the coronavirus lockdown. This week, the authorities said there were no active cases left in the country.

More than 20,000 rugby fans packed into the stands at a stadium in southern New Zealand on Saturday, June 13, after the country reopened its sports venues and lifted its months-long lockdown.

With authorities in the city of Dunedin confident of their victory over the coronavirus, fans were not required to wear masks or follow social distancing rules. 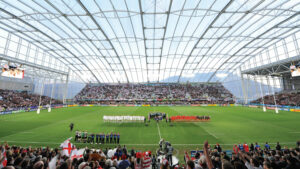 was “the world’s first” professional rugby game since pandemic spread across the globe.

He added that attending the game was “a payoff for all the hard work of 5 million New Zealanders.”

German exchange student Johanna Linder said she had never seen a rugby match before, but described the event as a chance to “lift the people’s mood” and bring New Zealand together.

“It’s a great opportunity to socialize again,” she said, adding that people in Germany might be bit envious of the stadium crowds.

Germany, like most other countries, still maintains strict restrictions on top-level sporting events. While Germany’s top level Bundesliga teams returned to stadiums some four weeks ago, the fans are still banned from attending the games for fear of spreading the coronavirus. In turn, New Zealand lifted its lockdown earlier this week, with only some restrictions on entering the isolated country still in force.

The island nation of some 5 million people has seen around 1,500 infections and 22 deaths since the beginning of the pandemic. The authorities believe no coronavirus cases are still active in the country.

Observers believe the officials’ success in eliminating the disease was a combination of speedy and efficient lockdown measures, clear communication, effective testing, the government’s adherence to the rules, and New Zealand’s remote position.

Deutsche Welle (DW) is Germany’s international broadcaster and one of the most successful and relevant international media outlets. Photo by Populous.