The San Diego skyline will never be the same.

On February 21, 2018, the San Diego Convention Center debuted its newest feature: LED colored lights that illuminate the newly renovated iconic fabric roof. The lights change colors and are visible across the downtown area: from the Gaslamp Quarter to Coronado Bay, and especially to visitors flying in on their way to the San Diego International Airport.

The light fixtures are the same as those used to light the Empire State Building in New York City.

“This is a very different space than it was when it opened in 1989,” said Executive Vice President and General Manager Karen Totaro, CVE. “I am proud of 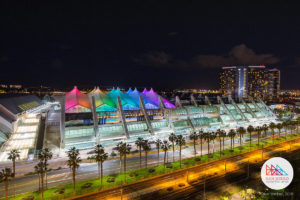 the entire team. It took hundreds of people – from our internal staff to our partners – working collaboratively in this effort including BirdAir, ProCal Lighting, Siemens and Kinsman Construction, just to name a few. Their work will serve as a legacy for both our city and our customers to live up to our award-winning title ‘Venue of Excellence’ and ‘Best of California.'”

The lights are the “icing on the cake” of the newly remodeled exhibit space, one of the most unique spaces in the conventions and meetings industry. The 90,000 square foot venue recently underwent a $16.7 million renovation, part of the largest series of upgrades in the Convention Center’s history.

“The Sails Pavilion is our Convention Center’s most distinguishing feature,” said San Diego Convention Center Corporation President & CEO Clifford “Rip” Rippetoe, CVE. “After 28 years in operation, it was time to reinvest and reimagine the space. Not only were we able to conduct necessary maintenance and upgrades without interfering with our business, but we were able to add something new that will make the Convention Center truly shine.”

All of the upgrades, except the LED lights, were funded through a $25.5 million loan from the California Infrastructure and Economic Development Bank (IBank). The LED lights were paid for by the Convention Center’s reserves, at a cost of $377,000.

The concrete floor replacement started in December of 2016 and was completed in March 2017. The roof replacement began in August of 2017 and wrapped up in February 2018.

“The renovation of the Sails Pavilion and the other important capital improvements taking place around the Convention Center have been a major priority for our Board of Directors,” said Gil Cabrera, Chair of the San Diego Convention Center Corporation Board of Directors. “The work being done ensures we will remain the region’s premier gathering place. Each project improves upon our role as an important economic driver that will generate an estimated $1.2 billion in regional impact this year alone and provide $27.5 million in hotel and sales tax revenue to the City of San Diego.”

“These upgrades represent an infrastructure investment in one of the greatest economic engines that we have,” said the Mayor. “This iconic Sails Pavilion is how so many people – San Diegans and visitors alike – help to identify our great city skyline.”

Rafael Castellanos, Chairman of the Port of San Diego Board of Port Commissioners, said this project is the start of an overall synergistic approach to the lighting of San Diego Bay.

“I’m especially excited because this illumination of the Sails Pavilion is the first step in what will be a bay-wide illumination,” Castellanos said. “That includes the lighting of the San Diego-Coronado Bay Bridge, lighting up what will be the new home for the San Diego Symphony (along the waterfront behind the Convention Center) and the Central Embarcadero.”