by R.V. Baugus
#alamodome, #coronavirus, #sanantoniofoodbank, #stevezito
Comments are off

It was another weekday and another 5:30 pm, which meant it was time to invite David Muir and ABC World News Tonight into our living room for the latest round of coronavirus coverage. Quick note: even television news anchors have been heard telling us to limit the amount of time we spend watching the pandemic coverage as it can lead to major negativity.

But on this particular day I watched, and what should my eyes see but video shots of massive lines of vehicles 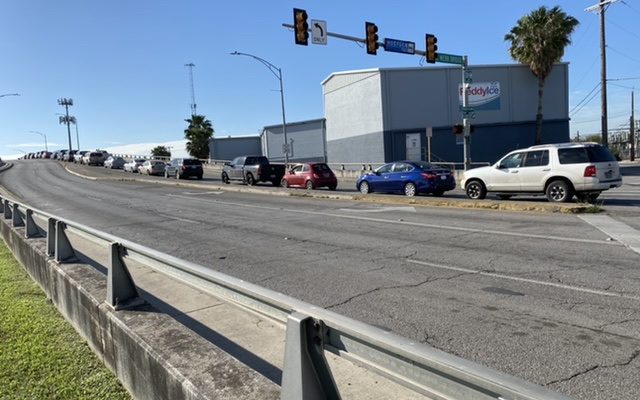 in the parking lot of the San Antonio Alamodome of people receiving much-need food. You have read a previous blog from me sharing that as some friends and I were headed on a drive from Dallas to San Antonio to watch the boys high school state basketball tournament at the Alamodome we received word that the event was being (at the time) postponed, since canceled by governing authorities. That was March 12.

I had to reach out to Alamodome GM extraordinaire Steve Zito, CVE, to find out more about what the venue was doing during the pandemic. I was surprised (at just how fast it happened, not at the act itself) to learn that just five days after our drive the Alamodome hosted a four-day blood drive from March 17-20 that raised more than 1,500 pints of blood. Who could have imagined when March began how March would end? Who could have foresaw going from playing hoops to jumping through hoops to help in a time of crisis?

Before March would end, on the 31st the venue hosted its first drive-through mega-food distribution event for the San Antonio Food Bank which provided more than 2,000 families with meals.

in the very same month on March 31 that the girls state tournament had been played at the venue and the boys were getting set to crown their state champions, the Alamodome hosted its first drive-through mega-food distribution event for the San Antonio Food Bank, which provided more than 2,000 families with meals. On April 17, a day the nation would usually be festive and celebrating St. Patrick’s Day, the Dome hosted its second drive-through mega-food distribution event for the local food bank and again provided more than 2,000 families with meals.

Next up on May 1 will be the third such event, while the Alamodome also serves as the supply depot for needed medical supplies for San Antonio and Bexar County.

“At times like these, it certainly reiterates the importance of what we all do, if even in a small way and how we can have an impact and help serve the community we all live in,” Zito said.

The same is true and can be said about IAVM member venues throughout the country as they continue answering the call and helping in their communities. We truly are navigating change together.