On October 19, the San Diego Convention Center’s Executive Leadership Team organized three celebrations so that each employee on the three shifts could celebrate the win. It was a great team-building event that instilled pride for this prestigious recognition. It was important that the overnight shift be included, because even though they don’t interact as much with the daytime shifts, they have played a role in helping the facility attain this achievement, and their hard work does not go unnoticed.

At the event, staff enjoyed games, music, and photo booths, while eating pizza and ice cream served by their director-level peers and executive 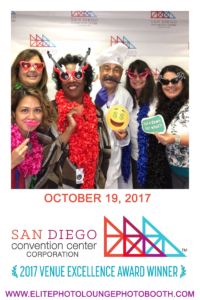 SDCC staff ham it up while celebrating their Venue Excellence Award.

staff. Each shift was treated to a raffle drawing for a chance to win certificates to local restaurant or attraction. The highlight was the photo booth where coworkers could celebrate the VEA trophy and the role each of them has played in our successful role as the region’s premier gathering place.

The San Diego Convention Center has had other notable recent achievements including:
Receiving several sustainability recognitions for environmental leadership, most notably, LEED Gold certification by the U.S. Green Building Council
Securing a historic $25.5 million state loan that is being used to finance several vital infrastructure projects as part of the largest series of upgrades in the building’s history
Combining SDCCC’s award-winning communications strategy with a newly launched community outreach plan to educate the impact of our facility on the local economy and helps support our transparency.

Also recognized at the Nashville event were SDCCC Event Manager Daren Smylie and Facilities Services Supervisor Bahiah Odeh-Eppig. Both were both named among IAVM’s 2017 class of 30 Under 30 award, a program that focuses on identifying and developing the talent of venue industry professionals 30 years of age and under. In an effort to nurture the growth and development of our staff, the SDCCC team advocates for industry-wide education.

SDCCC has multiple graduates from IAVM’s Venue Management School, IAVM’s Academy of Venue Safety and Security and IAVM’s Senior Executive Symposium. Rippetoe currently serves on three different IAVM committees and Totaro is a past board chair of IAVM. Many of SDCCC’s senior staff sit on a number of industry boards and committees and readily volunteer their insights for future generations. Convention center staff is working to share best business practices with IAVM’s brand new Energy Management Council, setting policy for green meetings all around the world.