SEE, SAY, DO SOMETHING Encourages Students Of Dallas ISD To Become Situationally Aware

Craig Miller, chief of police for the Dallas Independent School District Police Department, had moments earlier finished addressing a crowd of 6,000 mostly students sprinkled with educators and administrators at the American Airlines Center in Dallas at a community outreach program involving the arena, school district, and IAVM, when he commented on just how essential and impressive the event was.

Then, he added, in a somber tone, “It’s kind of ironic we are doing this right after what happened last Friday.”

That day, of course, was when a student at Santa Fe High School near Houston unleashed a volley of shots into a classroom that resulted in the deaths of 10 individuals and wounded several more. The student voluntarily surrendered and is in custody.

Titled, SEE, SAY, DO SOMETHING, IAVM and Director of Education Mark Herrera brought together a diverse range of presenters from various backgrounds to share with students over the course of more than two hours the importance of 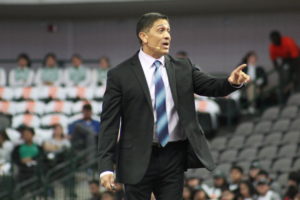 boldly speaking up when anything is suspicious. It is a refrain that is common and certainly not novel, but a refrain that cannot be pushed enough at a time when data validates the troubled times that have plagued schools since Columbine on April 20, 1999. In fact, a show of hands in the crowd revealed that most were not even born when Columbine took place and know about it only by what they hear and read.

Herrera noted that the United States holds the unwanted distinction of having the most active shooter events with 21 such incidents already recorded at schools in 2018.

“Students had knowledge of 80% of the school shootings,” Herrera said. “These aren’t just sudden events. These are talked about in advance on social media, in the cafeteria. Over 90% of students planned the attack in advance.”

Chief Miller looked out at the sea of students that his department represents and implored their help.

“Our mission is to work with the campus administration,” he said. “Arrests are not our goal, but when we are challenged with situations we have to do often what we don’t want. Major change comes as a result of a major crisis. Columbine changed the way we respond. Then 9/11 changed forever how we do things. Sandy Hook (elementary school shooting in Connecticut on December 14, 2012, in which a shooter killed 26 people) brought about incredible changes in our schools and how we protect them.”

Chief Miller noted traveling to Parkland, Florida, 11 days after an attack on February 14 at the high school there in which 17 people were killed by a shooter. “You realize how personal this is now for people,” he said.

“Each of you in this crowd has a job to do,” he added. “Our job is to provide a safe learning environment for you. Your job is to supply information.”

“We cannot predict active shooters, but we can prevent them,” he said. “There are ways to prevent an active shooter. It’s not by looking at an individual and saying, ‘Oh, this person looks like an active shooter. I can tell by the way he’s dressed or she’s dressed.’ It’s all based on behavior. The behavioral aspects of what they do to share information out there that is basically a cry for help.”

It is a cry that often ends up being acted out and has dire and often deadly consequences.

“They are doing things unconsciously,” Skillestad said. “They may do it in writing, they may just go by their actions and showing that, hey, I am going down a pathway that people need to know that is not the pathway of normalcy.” 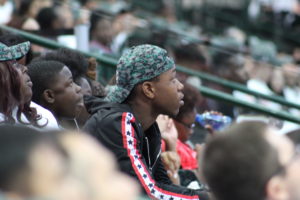 Again, Skillestad cautioned against making blanket summations of individuals, even though cues and hints get dropped along the way by the perpetrator. Such was the case at Santa Fe where the killer proudly displayed a “Born to Kill” shirt on social media.

“If this is something that he has never worn before to school or other behavior like that, then perhaps,” he said. “What we see is a lot of people will say, well, violent video games are the root cause of this. Well, how many kids play violent video games? Violent music where everybody listens to Marilyn Manson or whoever? Are they active shooters? No. It’s just part of the overall makeup of these individuals. What we believe they have is some type of deep-seeded angst for whatever reason. They were picked on, they felt slighted by not being chosen for an academic team or an athletic team. They just don’t feel like they are part of the community.

“My message is that each and every one of us, not only the students and not only the teachers but each and every member of the community, has to have the fortitude to stand up to someone who’s a bully or is picking on someone and saying that we are not going to have that. Then put it on those in positions of responsibility to make it incumbent on them to stop this. It may work in some situations and it may not, but if we don’t do anything nothing is going to change.”

Skillestad said that individuals need to be “upstanders as opposed to bystanders.”

“We don’t want people watching and saying, oh, isn’t that nice? We want people to react and respond and be a proactive force in the community.”

Scott Breor, director, Protective Security Coordination Division with the Department of Homeland Security, leads a group that looks at the vulnerabilities within soft targets. Schools fall into that category.

“If you think about a facility or a venue where there is a large gathering of people, you often have an openness that schools have, that our churches have, vulnerabilities that can be exploited,” he said. “You could look at a school because it does have students populated, it does have open access to some extent. Newer constructed schools are better positioned to limit access with access controls, but schools typically have a vulnerability that can be exploited.”

Breor said he really had just one main message to implore the students, and that is to get involved.
“They need to assist whether it is a suspicious activity that another student might exhibit,” he said. “Think about the 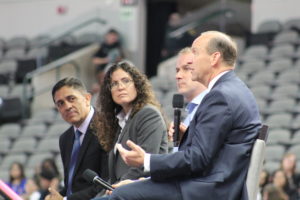 actions that are available to you if you were to hear a gun shot … if a gun shot went off in this room right now, where are the exits? Did you even think about that as you walked into this room?”

Breor emphasized that while students can be eyes and ears, the professionals are on the scene for a reason.

“Students don’t need to become security professionals but they need to get a level of awareness within the environment they are in,” he said.

In addition to the education, students got to enjoy performances by dance teams of the Dallas Mavericks and Dallas Stars, while the drum lines from Bryan Adams High School and Carter High School energized the crowd.

Dallas Maverick Dwight Powell opened things by welcoming the students. “We remember our middle school and high school days,” he said. “Take and protect your future as well as your classmates. It is exciting to see the good work you are doing for your community.”

Breor noted that this rollout at an IAVM member venue is a great start and one that has potential for future growth throughout the country.
“As this model possibly rolls out to other localities and metropolitan areas, our department wants to further along this relationship with IAVM so we can be not only supportive but also take part to show that there really are no lines where something belongs to this department, something belongs to the community, this belongs to the school district. We are all part of a community and we all need to address this for our schools.”