Sheltering The Displaced From Wildfires: “It’s The Right Thing To Do”

The wildfires that raced across southern California and resulted in hundreds of thousands of charred acres has simmered. For those who helped shelter not just displaced people but animals as well, the memories remain from an event that goes down as the third largest blaze in modern state history.

The Thomas Fire broke out on December 4 in Ventura County and destroyed multimillion-dollar homes and other structures before moving north along the coast to nearby Santa Barbara County. In 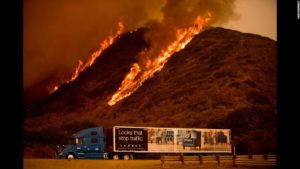 Flames from the Thomas fire burn above a truck on Highway 101 north of Ventura, Calif., on Wednesday, Dec. 6, 2017. (AP Photo/Noah Berger)

Ventura, the spread of the fire was too close for comfort for Loanne Wullaert, general manager of the Ventura Theater.

“The fire was just about two blocks away,” Wullaert said on the eve of a pre-Christmas Holiday sing-along that took place on December 22 to provide needed items and Christmas gifts to families that lost their homes. “We are at the bottom of the hillside, where there is us, a Starbucks, and a parking lot. The fire burned right down to that. It sort of hit the road and came very close to City Hall and an area where a lot of historical houses are.”

Wullaert said that donations flooded in for the sing-along to help make a season of stress and uncertainty a bit more bearable.

“We had all kinds of toys donated to us and I had like 200 Christmas stockings to give to families,” she said. “The sing-along was mostly people who work here. They dress up and a lot of kids come. Maybe it helps people forget they lost their house for just a while. The show was for the entire community but to benefit the families that have suffered through this.”

At the Del Mar Fairgrounds in nearby San Diego County, CEO/General Manager Tim Fennell opened his doors to take in more than 1,000 horses, along with goats, pigs, sheep, and donkeys.

“We got word of the wildfires and horses needing to be evacuated,” Fennell said. “About 250 of them were actually thoroughbreds from a training facility where half of it burned down and 46 horses were killed. We were up and running in about a week as an evacuation site. The majority of the horses have now moved out, and the ones that remain are the thoroughbreds. The training facility is using the fairgrounds as a training site as we speak and will be through the immediate future until they get back up and running.”

Fennell recalled that the Del Mar Fairgrounds took in more than 1,000 horses in 2003 from another major wildfire and yet another in 2007 when 2,600 large animals and 2,200 people took shelter at the venue.

“We were a major evacuation site for a good 10 days,” he said. “We don’t wait for people to designate us (as a shelter-in-place location). Since 2007 we made an agreement with the county that we would become an official evacuation site. But, again, even with that designation, we don’t wait for somebody to tell us to pull the plug. We just do it. It’s the right thing to do. We don’t worry about getting paid. We worry about taking care of the animals and the people.”

Wullaert and Fennell said that some events had to be moved on their respective calendars, but that there were no major disruptions.

“We were taking horses in on Thursday (December 7) and still had a holiday party that evening,” Fennell said. “That weekend we had a major sellout country and western concert in our arena. Was it an inconvenience? Probably so, but it’s what we do and we still continued to do our other events. We did the concert and had a gun show. We didn’t skip a beat. I have to applaud our team here and a lot of volunteers from the community. It was a huge community effort and very successful.”

For Wullaert, the wildfires brought back a very recent reminder of another natural disaster — Hurricane Harvey.

“When Harvey hit, I decided I wanted to take dog food to Texas,” she said. “I put a post on Facebook saying that I wanted to do that. The community brought trucks of dog food, clothes, and hygiene products. We took trucks and drove to Texas and when I got back the entire community here had filled the theater with so many donations that we had to get a semi to take it all to Port Arthur, Texas.

“That was just in September. When this happened the community responded so fast because it hit home. We had kind of a practice with Harvey. Everybody already knew what kinds of things people needed, so the response was great.”

Wullaert has been at her venue since 1997, and prior to that resided in Santa Barbara when a wildfire broke out there.

“They have lifted all the evacuations so everyone can go home now,” she said. “There are still hot spots that they will be dealing with this month, but the imminent threat is gone. It was terrible how many fires happened at the same time. The Del Mar one was brutal because of the horses. That was a very quiet moment when we heard about that.”

Wullaert said that her staff went to the Fairgrounds the first night of the fire to help evacuate the animals. “To see all the horses and animals they brought in and then you turn around and see the entire hillside right behind you in flames … it was definitely a shock.”

Through it all, the human response of helping those in need shined brightly, something public assembly venues handle very well. The needy are no longer strangers, but human beings needing help. The response is not just restricted to a community aiding a community, either, but a state helping a state, as Wullaert made clear.

“The 805 (area code) loves Texas,” she said. “I cried so much when I came home and saw all the donations for Texas.”

Texas has cried back for California.