On Thursday, October 3, Simmons Bank assumed naming rights to Verizon Arena, which is now Simmons Bank Arena. The event comes nearly a year after the bank’s November 2018 announcement of a $10.5 million deal to acquire naming rights to the 18,000 seat multi-purpose arena in North Little Rock, Arkansas.

New branding will be seen in-venue on apparel, cups, napkins and banners, as well as on the venue’s website and social media handles as of October 3. Simmons-branded signage is expected to be installed later this year.

“The Arena is a beacon for economic vitality, culture and world-class entertainment in Arkansas,” said George 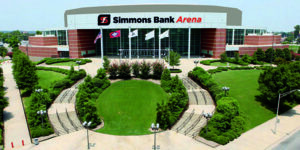 Makris, chairman and CEO of Simmons First National Corporation. “Simmons is proud to join our name with an organization that helps our home state flourish by driving commerce and creating shared experiences.”

“As we start our third decade, the Arena Board is excited to begin this new partnership with Simmons Bank, said Rett Tucker, chair of the Arena Board. “It will enable the Arena to continue to be one of the best entertainment venues in the country.”

The official name change coincides with the Arena’s 20th anniversary, a milestone that the organization is celebrating with a variety of events hosted throughout the month and a commemorative poster.

With more than 400,000 guests each year, the Arena has hosted hundreds of top industry artists such as Elton John, The Rolling Stones, Paul McCartney, The Eagles, Taylor Swift, Justin Timberlake, Bruno Mars, George Strait, Garth Brooks, Stevie Wonder and many others. In addition, the Arena has welcomed many family shows and sporting events including Disney on Ice, Cirque Du Soleil, Harlem Globetrotters, Monster Jam, and the Arkansas Razorbacks.

To celebrate the name change, Simmons Bank launched a Facebook contest on October 3 to give away two free tickets to the October 25 Eric Church concert – one of the first events at Simmons Bank Arena.

Jana DeGeorge is director of marketing at Simmons Bank Arena.