by R.V. Baugus
#southpointarena, Daktronics
Comments are off

South Point Hotel, Casino and Spa continues a long-standing relationship with Daktronics with the installation of a new state-of-the-art, four-sided video display system for the property’s Arena and Equestrian Center in Las Vegas, Nevada.

The new, 4-millimeter line spacing video displays replace the previous Daktronics centerhung technology installed in 2006 and nearly triples its size. The 4-millimeter spacing makes the new screen among the 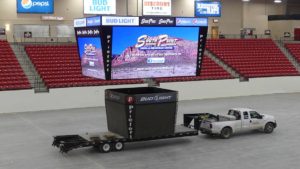 tightest LED resolutions of any centerhung video display in any arena in the country. The 13,797-pound display will be suspended from the ceiling of the 4,600-seat arena.

“Michael Gaughan and South Point’s relationship with Daktronics began well before the property opened in December 2005,” said Steve Stallworth, South Point Arena and Equestrian Center General Manager. “When Michael Gaughan first built the Orleans Arena he used Daktronics exclusively and purchased the first ‘ring beam’ LED fascia in Nevada at that time. When he opened the South Point, he purchased Daktronics screens for the Arena and his state-of-the-art tournament Bowling Plaza. Daktronics was the only company in the business that we trusted to provide us with the quality and experience we were looking to deliver to our guests.”

The new displays are each capable of variable content zoning, allowing each to show one large image or multiple windows of content. As a result, the system can show any combination of live video, instant replays, real-time event results and statistics, graphics and animations, and sponsorship messages.