IAVM’s Women in Leadership program is pleased to welcome Jeanie Buss, CEO and Governor for the Los Angeles Lakers, as part of a panel of industry leaders to address attendees at VenueConnect on Tuesday, August 8th, in Nashville, TN. The session, which is sponsored by ABM, will be moderated by Kim Stone, Executive Vice President and General Manager for American Airlines Arena in Miami, and cover important topics and trends facing today’s venue management industry.

Entering her fifth season as Chief Executive Officer after 15 seasons as Executive Vice President of Business Operations, Buss is responsible for running all aspects of the Los Angeles Lakers organization. Buss, who not only leads all Laker business operations, which include managing team marketing and sponsorships as well as relationships with broadcast partners, also oversees the team’s basketball operations, working closely with President of Basketball Operations Earvin “Magic” Johnson and General Manager Rob Pelinka. 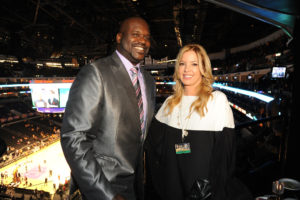 In addition to her role as CEO, Buss also serves as the Lakers’ Governor, representing the team on the NBA’s Board of Governors. She is currently a member of the NBA Advisory and Finance Committee and has served on the NBA Labor Committee during collective bargaining with the NBA Players Association.

Buss, who spent four years serving as President of the Great Western Forum before joining the Lakers, began her career at the age of 19 as general manager of World Team Tennis’ Los Angeles Strings. While guiding the team to two league titles, she also created the Forum Tennis Challenge Series, which became a regular part of the Great Western Forum calendar for years. Buss was responsible for bringing in players such as John McEnroe, Pete Sampras, Andre Agassi, Jimmy Connors, Steffi Graff, Chris Evert, Martina Navratilova and many other top professionals.

Named by the Sports Business Journal in October of 2011 as one of the Game Changers-Women in Sports Business, Buss serves as a board member on the Southern California Committee for the Olympic Games working to bring the Olympics back to Los Angeles. She also is a co-host of Lakers All Access, a yearly event presented by the LA Sports and Entertainment Commission, a nonprofit organization, which draws events and attractions to Los Angeles.

Actively involved in the community, Buss lists Canine Companions for Independence, The Amanda Foundation and the Best Buddies organization among her many charitable endeavors, while also working internally with the Lakers Youth Foundation to raise money for Southern California Youth charities.