by R.V. Baugus
#daniellecavinder, #eltonjohn, #vanandelarena, smg
Comments are off

SMG-managed Van Andel Arena teamed up with the Pamella Roland DeVos School of Fashion Studies of Kendall College of Art & Design of Ferris State University (KCAD Fashion Studies) to design something special for Elton John’s visit to Grand Rapids, a garment for Elton himself inspired by the many looks he has flaunted throughout his career.

Ten KCAD Fashion Studies students submitted a collection of three different outfits, and each collection was displayed and voted 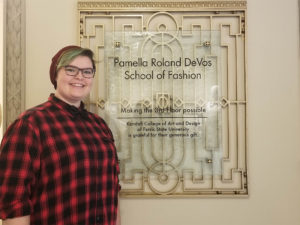 on by the public on Van Andel Arena’s Facebook page. Student #2, Danielle Cavinder, received the most fan votes for her Elton John Collection inspired by his Farewell Yellow Brick Road Tour. Cavinder will receive a $1,000 scholarship for her work, and one of her winning garments will be displayed backstage near Elton John’s dressing room on Monday, October 15, at Van Andel Arena.

“It’s a really awesome opportunity to be exposed through this contest as a designer. To be a winner is a great opportunity and solidifies that this is what I’m supposed to be doing and that my work is appreciated,” Cavinder said. “To be able to present my work to Elton, as a legend and as someone whose aesthetic I identify with, is amazing. I want to thank Lori Faulkner, Kelly Muschiana, Stephanie Wood, and everyone at Van Andel Arena.”

In addition to Cavinder’s winning garment all 10 KCAD student’s design sketches will be on display backstage at Van Andel Arena for Elton John’s Farewell Yellow Brick Road Tour on October 15.

“Collaborative thinking makes great things happen and partnering KCAD Fashion Studies and Van Andel Arena/SMG is no exception,” said Lori Faulkner, Fashion Studies Chair of the Pamella Roland DeVos School of Fashion at Kendall College of Art and Design of Ferris State University. “This collaboration is a fantastic opportunity for student designers to use Elton John as their muse and let their creativity run wild.”