The NFL Tampa Bay Buccaneers have revealed plans to expand capacity at Raymond James Stadium to cater to an unprecedented demand for 2022 season passes.

The Buccaneers have announced an additional seating area named The Krewe’s Nest, which will be 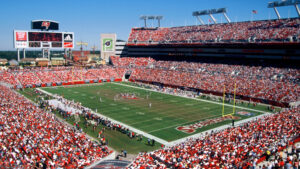 located in the south end zone at Raymond James Stadium. The additional 3,600 seats will increase the stadium’s capacity to nearly 70,000 for one of the most anticipated seasons in Buccaneers history.

“The upcoming 2022 season includes one of the most exciting slates of home games in our franchise history and we are excited to announce that this year, more fans than ever before will have the opportunity to watch the games at Raymond James Stadium,” said Buccaneers chief operating officer, Brian Ford.

“We continuously look for ways to improve the gameday experience for our great fans and to provide an unmatched home-field advantage for our team. With nearly 70,000 fans in attendance for home games, this will be one of the most memorable seasons in Raymond James Stadium history.”

In addition to discounted parking, Krewe’s Nest season pass holders will also receive 2022 playoff purchase priority and the opportunity to upgrade seats for the 2023 season.

The Buccaneers’ move to expand capacity comes with the franchise guaranteed at least another season with legendary quarterback Tom Brady. The 44-year-old in February announced his retirement after a glittering NFL career, only to swiftly backtrack the following month by stating he would return for the 2022 season.

Ahead of the 2021 season, the Buccaneers unveiled the Champions Lounge and a series of other enhancements at Raymond James Stadium.