“These awards are such a wonderful reflection of the creative, hardworking team at TCF Center,” Totaro 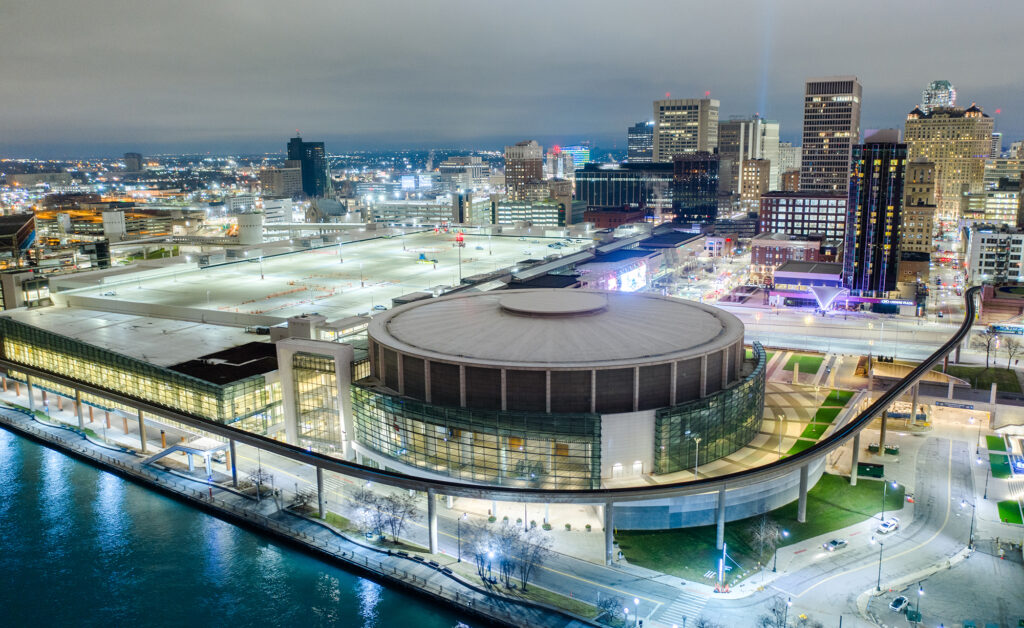 said. “I’m so proud to be part of this extraordinary group.”

Exhibitor Magazine readers evaluated their favorite convention centers using an objective algorithm weighted to reflect how they value a variety of variables. The myriad criteria considered were categorized into five primary areas:

TCF Center received this distinguished award for four years in a row. The award is a particular honor because essentially it comes from the venue’s trade show customers.

The silver medal in the Best Convention Center Category, Midwest Region was given to TCF Center by the Northstar Meetings Group in their 2021 Stella Awards program. It demonstrated a commitment to helping meeting professionals pull off a flawless event, as determined by the people who know best: experienced meeting planners. The nominations received public, planner voting and third-party, objective planner judging.

The Stella Awards honor excellence in the meetings industry. The program distinguishes suppliers from around the globe that consistently deliver quality service and innovation to meeting and event professionals. Winners include the very best hotels, convention centers, conference centers, convention and visitor bureaus, destination marketing organizations, destination management companies, airlines and cruise lines. This year, more than 6,000 votes were cast from around the world for the 603 destinations, hotels and service providers nominated in 17 categories in six regions in the United States and worldwide. There were a total of 260 total winners and finalists for 2021.

The program distinguishes suppliers that consistently deliver quality service and innovation to meeting and event professionals. The winners are recognized for achieving overall excellence, superb food and beverage, professionalism of staff, technology innovations and other critical aspects of meetings and event experience.

“Congratulations to all of the 2021 Stella Award winners and finalists,” said Loren Edelstein, vice president and content director for Northstar Meetings Group. “All of the honorees truly represent excellence in the meetings and events industry as valued and respected suppliers.”

For the seventh year in a row, Facilities & Destinations Magazine has recognized TCF Center with its Prime Site Award, as a venue that is an ideal environment for stakeholders to engage in dialogue, brainstorming, learning and networking. Winning the award signals client satisfaction on many levels and recognizes that the center is a standout in a competitive meetings marketplace.

TCF Center was recognized with this award for providing several essential community services in downtown Detroit during the COVID-19 pandemic.

In March 2020, TCF Center’s doors were opened to Forgotten Harvest and Food Rescue US as a food distribution center to lessen food insecurity in Southeast Michigan; aided the U.S. Army Corps of Engineers’ Detroit District to construct a field hospital for up to 1000 COVID patients in the venue to help alleviate the overcrowded Southeast Michigan hospitals; housed a Battelle for sterilizing and redistributing masks; housed the Pope Francis Warming Center to care for the needs of Detroit’s transient population including showers, laundry, food, rest, legal counsel and health care; became a 2020 General Election Ballot Counting Center; and served Detroit’s largest COVID vaccination center.

Amid these services, the facilities team was meticulous to create separate zones for each initiative and were highly strategic to steward the center’s energy use wisely in concert with safety. One strategy included stacking the segregated zones to be served by the same air handling column without risk of cross exposure. Through careful research, TCF Center devised top procedures to make sure air changes aligned with health best practices without excessive energy costs.