The Ongoing Battle for COVID-19 Funding Relief: Keep Swinging and You Might Just Get Lucky

On March 12 we were about to tip-off the Missouri Valley Conference Women’s Basketball Tournament at the TaxSlayer Center in Moline, Ill. The teams were on the court warming up and after an emergency conference call with the NCAA, the decision was made to cancel. Like many venues we were shut down suddenly and had no idea of the massive financial blow we were about to get hit with. 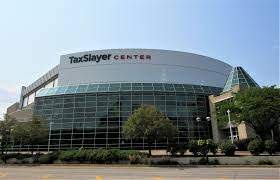 was a vaccine or treatment distributed and we have been postponing and cancelling what was going to be a solid run of upcoming events ever since. We had to refund or prorate our building sponsorships and suite leases resulting in virtually no income for the foreseeable future. This led to furloughs and layoffs of most of our employees and we were desperate to find a way to qualify for relief funding.

There has been relief funding available for some entities in our industry but since like many other venues we are a quasi-governmental municipal authority that is not part of a city, county, or state budget, we were left out. Unfortunately, civic center authorities that are set up as municipal corporations, civic center authorities, and municipalities are not eligible for most if not all of the elements of the federal Coronavirus stimulus package when it comes to venues like ours (The Illinois Quad City Civic Center Authority).

We saw the need to take action to lobby and educate our elected officials about our situation. Many of them mistakenly assumed we would fall under the city’s budget and they could cover our losses with funding they could qualify for but that was not the case.

The first thing we did back in April was get together a coalition of other venues in the state that were also set-up as quasi-governmental entities. We compared resources and utilized the city of Aurora, Illinois’ lobbyist, Dan Shoman, who was extremely helpful in putting together an organized effort. We contacted our respective state and federal elected officials and informed them of our situation and the economic peril we faced. In our case we conveyed that we were projecting a net loss of $2.4 million the upcoming fiscal year due to the shut down and that we represented approximately $100 million annually in economic impact to the regional economy.

We next received valuable support from IAVM’s President and CEO, Brad Mayne, and Board Chair, Tammy Koolbeck, who advocated for our cause. They were both amazing and were an impactful force throughout our efforts. We were able to utilize the expertise of IAVM’s lobbyists, Elizabeth Frazee and Chani Wiggins of Twin Logic Strategies. They offered strategic direction and opened lines of communication to several influential politicians to further our cause.

We also sought out advocacy from Moline Mayor Stephanie Acri and our current Board Chair, Reggie Freeman, who is also the Mayor of East Moline. They wrote letters and put us in touch with key players in the state. The Quad City Chamber of Commerce President, Paul Rumler, and Visit Quad Cities President Dave Herrell were terrific resources for information as well.

The majority of our efforts since May have been directed towards getting included in government stimulus bills to qualify for the Payroll Protection Package and the CARES Act. Although there wasn’t any immediate success, we continually educated more and more political figures in regard to our dilemma and I believe getting more people involved ultimately paved the way for our next push for Coronavirus related expenditure relief.

In July one of our Board members, Jeff Nelson, informed us that Navy Pier and some of the museums in Chicago that were also Illinois Authorities similar to ours, were candidates for government assistance through the Local Coronavirus Urgent Remediation Emergency Support (CURES) program. This program is federally funded from the Coronavirus Relief Fund using dollars allocated to Illinois through the CARES Act. We contacted The Illinois Department of Commerce & Economic Opportunity and discovered that we had to act fast because the deadline to apply was only a couple days away, so our staff leaped into action. I would be remiss if I didn’t acknowledge the efforts of our Assistant Executive Director, Rocky Jones, Senior Accounting Manager, Kim McVey, and Director of Operations, Kevin Snodgrass, who put together all the details for the DCEO application and got it submitted just before the deadline for applications expired. We were informed on August 20 that we were eligible to qualify for reimbursement of up to $484,622 in relief assistance!

The TaxSlayer Center will be using these reimbursement funds to underwrite some of the COVID-19 related projects we are undertaking in the coming months during the shutdown. We have projected expenditures of over $1 million on these projects. Among the upgrades will be a retrofit to automatic flush valves and faucets in all public restrooms, bacteria killing UV lights to disinfect escalator handrails, WIFI upgrades to support mobile concession ordering platforms for contactless payment, installation of hand sanitizing dispensers throughout the facility, the purchase of electrostatic sprayers to disinfect seats and armrests, along with new PPE inventory and several other COVID-19 remediation measures.

The program deadline for project completing and submittal for reimbursement is December 30 and our goal is to have all projects completed by mid-November. When the time comes to re-open for events, we want to make sure that our guests and employees have the safest possible environment and feel comfortable coming back to the building. We are also using this downtime to complete several other capital improvement projects using funds from our reserves to update our venue and plan to host a Grand-Reopening Ceremony prior to our first event back once the indoor mass gathering mandates are lifted.

The moral of this story is to use every resource available and keep swinging because you never know when it could pay off. Hopefully this information is helpful to other venues that face this same situation.

Scott Mullen, CVE, is the Executive Director of the TaxSlayer Center in Moline, Illinois, and serves on the IAVM Board as Director of Arenas.