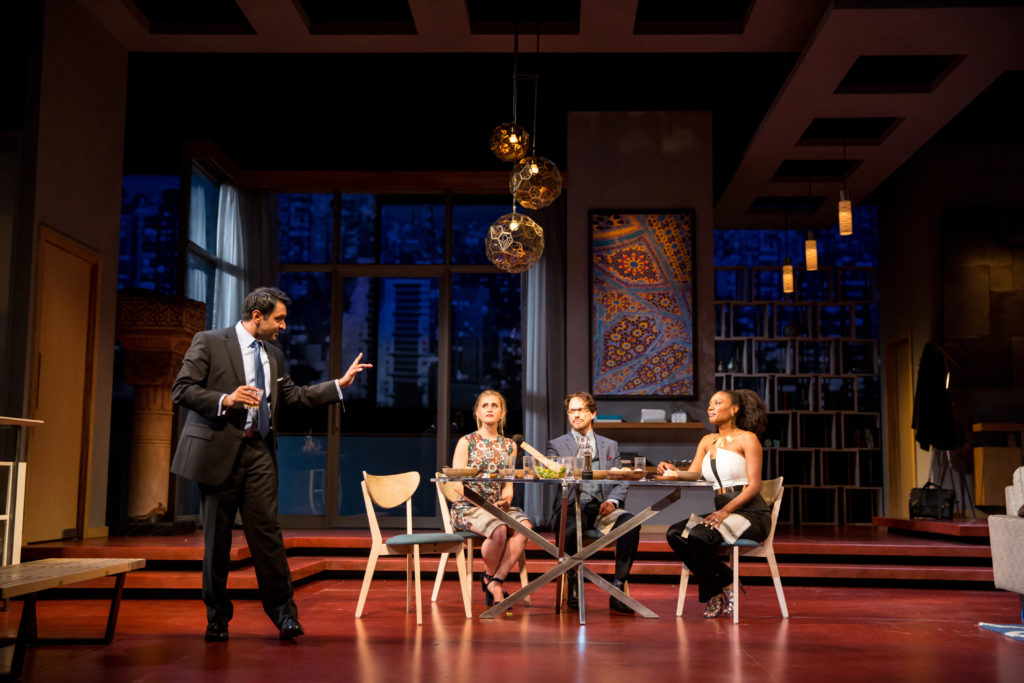 Disgraced performed at the Guthrie Theater.

Ah, the last quarter of the year. A time for reflection and list making, and one of my favorite lists is American Theatre‘s 10 most produced plays of the season. I suspect a few employees at performing art centers may be interested in this list, too.

“This year, we received a total of 411 season submissions from member theatres of Theatre Communications Group,” wrote Diep Tran, the magazine’s associate editor. “From there, we gathered all of the full-length productions scheduled between Sept. 1, 2016, and Aug. 31, 2017, running for at least a week’s worth of performances. Those productions numbered 1,946. To calculate our most-produced lists, it is our policy to exclude plays by Shakespeare and two perennial holiday shows (A Christmas Carol and The Santaland Diaries).”

The list actually includes 12 plays due to ties. Here’s the list, along with the number of productions scheduled:

Hand to God by Robert Askins (13)
Constellations by Nick Payne (10)
Disgraced by Ayad Akhtar (10)
Million Dollar Quartet by Floyd Mutrux and Colin Escott (10)
The Christians by Lucas Hnath (8)
Peter and the Starcatcher, adapted by Rick Elice from Dave Barry and Ridley Pearson (8)
The Legend of Georgia McBride by Matthew Lopez (7)
Sex With Strangers by Laura Eason (7)
Intimate Apparel by Lynn Nottage (6)
King Charles III by Mike Bartlett (6)
A Raisin in the Sun by Lorraine Hansberry (6)
Sister Act, with book by Bill and Cheri Steinkellner, music by Alan Menken, and lyrics by Glenn Slater (6)


Speaking from experience, the production of Disgraced that I saw at the Guthrie Theater in Minneapolis, Minnesota, during VenueConnect was excellent. It’s a powerful play that warrants a lengthy post-production discussion with friends. Try to see it if you can.

Registration for the 2017 Performing Arts Managers Conference will open soon. It takes place February 27 to March 1 in Chicago, a city renowned for its great theatre scene.