by Guest Author
performing arts
Comments are off 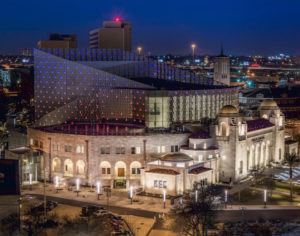 SEATTLE, November 15, 2016 — LMN Architects, a multidisciplinary design firm with a reputation for distinctive, community-focused projects of all scales, announce the selection of the Tobin Center for the Performing Arts as a recipient of the 2016 Global Award for Excellence from the Urban Land Institute (ULI).

Designed by LMN Architects in partnership with executive architects Marmon Mok Architecture, the $150 million expansion and renovation project embraces the multi-faceted cultural identity of the city with a distinctive tapestry of form, materiality, light, and landscape. The project was one of eleven real estate development projects from around the globe to have been selected as winners in the ULI 2016 Global Awards for Excellence program, widely recognized as one of the industry’s most prestigious awards programs. This year’s winners—representing projects in Asia Pacific, Europe, and North America—were honored recently at the ULI Fall Meeting in Dallas.

The jury noted that, “The Tobin Center for the Performing Arts brings a world-class, dynamic performance venue and gathering place to San Antonio, while creating a vibrant connection between the city’s main cultural venue and the famed River Walk.”

The program, established in 1979, recognizes real estate projects that achieve a high standard of excellence in design, construction, economics, planning, and management. Open to the entire industry (not just ULI members), the awards program is viewed as the centerpiece of ULI’s efforts to identify and promote best practices in all types of real estate development. “Cities are about people—the way people interact, get around, and go about their daily routines. Great cities are made of great places that make the urban experience easy and enjoyable,” said awards jury chairman Steve Navarro, executive vice president, CBRE l the Furman Co. in Greenville, South Carolina. “These projects reflect the highest standards of design, construction, economics, planning, and management. But most important: they are improving people’s quality of life.” 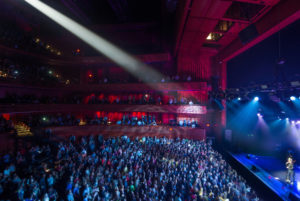 The Global Awards for Excellence showcase efforts that have both succeeded in pushing ingenuity and exemplifying best practices in land use across the globe,” said Patrick L. Phillips, ULI global chief executive officer. “This year’s winners have demonstrated a committed contribution to responsible real estate development and a dedication to building thriving, livable communities.”

Completed in 2014, the facility offers a rich diversity of architectural experience, capable of continuous transformation in response to programmatic and environmental influences. While retaining the Municipal Auditorium’s treasured historic façade, the Tobin Center weaves a new 183,000-square-foot facility into its framework of public space—including a 1,768-seat main performance hall and 231-seat flat floor studio theater. The complexity of the facility reconfiguration called for a grand, unifying design gesture to integrate new and old architectural components. The solution—a porous, shimmering metallic veil—creates a sculptural, environmentally responsive expression that celebrates the cultural life of contemporary San Antonio. The veil begins low at the River Walk, and rises through irregular sheer planes to form an unmistakable new architectural presence in the San Antonio skyline.

“We drew inspiration for the architectural form and detailing from the Spanish Colonial style of the original 1926 Municipal Auditorium, as well as San Antonio’s rich vernacular of color, pattern, and public celebrations,” said Mark Reddington, FAIA, lead designer and partner at LMN Architects.

Goals for the expansion and renovation were threefold: to create a large, flexible, multi-use performance space with acoustics comparable to the world’s finest concert halls; to restore the iconic historic building for future generations; and to create a vibrant connection between the city’s main cultural venue and the River Walk. The completed project combines the historic preservation of one of San Antonio’s most beloved architectural icons with the most flexible multi-purpose performance hall in the United States.

In a statement, George Shaw, FAIA, partner in charge for the project said, “LMN is humbled and honored by this important recognition for the Tobin Center. To have played a role in helping to positively shape the urban culture and civic vitality of San Antonio is incredibly rewarding. We share this honor with our passionately dedicated client group and design team.”

The project is also the recipient of a 2016 Honor Award and a Mayor’s Choice Award from the San Antonio Chapter of the AIA, a 2016 AIA Washington Council Civic Design Awards, Award of Merit, and a 2012 Chicago Athenaeum American Architecture Award.