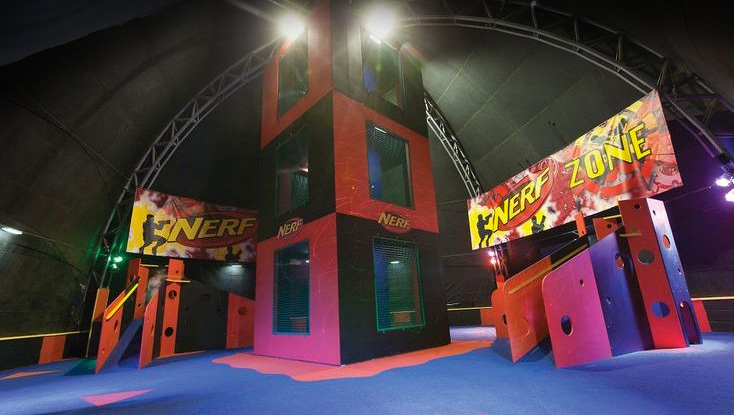 With one, successful year in the books, the introduction of dedicated NERF Combat Zones at Gulliver’s Theme Parks in Europe might be proof that a new entertainment trend is on the horizon.

“The huge visitor numbers are testament to the strong relationship between children and big brands such as NERF,” says Julie Dalton, managing director of Gulliver’s Theme Parks. “Parents continue to tell our arena teams that ‘NERF Zone’ are the easiest words to use in order to detach their children from personal game consoles.” (from Blooloop)

Licensing and distribution are handled by Paragon Entertainment, which shared the following highlights in a recent update:

• each arena is 3,875 sq. ft. divided into two areas
• average age range is 6-15 years old
• the three current arenas (at different parks) host an average of 65 birthday parties each weekend
• 2016 goals include doubling the portfolio of arenas in the U.K.

If you’re up for finding stray NERF darts under seats and in forgotten corners for years to come, maybe giant dart battles are the next big thing to bring into your facility?

The IAVM marketing team is ready and waiting to tilt the average age a bit higher.