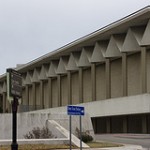 The Tulsa Convention Center is now the Cox Business Center after the company, SMG and the City of Tulsa jointly announced a long-term naming rights partnership.

The facility is currently home to Tulsa Project Theatre, Tulsa Revolution and the Oklahoma Defenders. It regularly hosts a variety of conventions, meetings, galas, concerts and other world-class events, attracting more than a quarter of a million guests annually.

“Today we celebrate more than just a new name for the Tulsa Convention Center, but a new era for the convention center and the BOK Center,” said John Bowen, market vice president for Cox Communications. “With the Cox Business brand comes the most innovative cable and broadband technology, greater broadcasting ability and new opportunities to attract conventions, regional and national events to our city.”

“The naming rights agreement with Cox Business is another step in SMG’s long-term plan to elevate the convention center to the top tier of convention facilities in the country,” said SMG General Manager John Bolton. “With the completion of the ballroom in 2010, the recently constructed state-of-the-art concession improvements, the reputation of SAVOR… catering and now the technological upgrades made possible by Cox Business as part of the naming rights agreement, the Cox Business Center is a shining example of what’s possible with modern convention centers and something that should make the citizens of Tulsa extremely proud.”

“The naming rights agreement with Cox Business is another step in SMG’s long-term plan to elevate the convention center to the top tier of convention facilities in the country.”

Technology gets an upgrade thanks to the new partnership as Internet bandwidth will be increased by more than 10 times the current speeds.

Additionally, new and improved internal broadcasting technology and distribution will better serve professional broadcasting events and other live and taped events at both the Cox Business Center and the BOK Center.

“The technology upgrades Cox has committed to will increase the marketability of our downtown area and bring greater economic benefit to the community through increased visits to hotels, restaurants and other downtown businesses. I congratulate the Cox Business and Tulsa Convention Center teams on this joint effort,” said Mike Neal, president and CEO of the Tulsa Regional Chamber.