The Walt Disney Company (Australia & New Zealand) and Melbourne Stadiums Limited (MSL) announced the unveiling of the official rebrand of Marvel Stadium, via the installation of the main Marvel Stadium signs – the first physical presence of the eight-year
partnership between the two companies.

As well as the main Marvel Stadium signs, visitors to the venue can expect to see new street artwork, a large-scale character 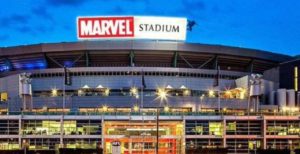 wall and other signage throughout, including the sign at Gate 3 near Southern Cross station.

The main signs are one of the largest neon signs in Australia, each measuring 35 metres wide by six metres high, while the sign letters are 4.3 metres high. The signs are also 2.3 times the height of the popular Marvel character, Hulk.

The first official event at Marvel Stadium was the Melbourne Victory/Melbourne City FC match on Saturday, October 20, followed by the Taylor Swift concert on Friday, October 26.

The official rebrand marks the start of an ever-evolving experience at Marvel Stadium over the life of the partnership between Disney and MSL, with the venue to include innovative, best-inclass experiences for visitors.