Washington Redskins to Bring More to the Fan Experience

by R.V. Baugus
#fedexfield, #washingtonredskins, NFL
Comments are off

Football is just around the corner, and the NFL Washington Redskins are ready with a number of initiatives designed to enhance the game-day experience at FedExField during the upcoming season.

Suite holders will benefit from six new catering packages, including P.F. Chang’s, which specializes in Asian food. Fans will also be able to order food digitally and stay in their suites for up to two hours after games. 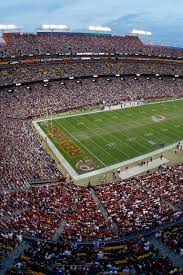 lane entry into the stadium and at selected concession stands, as well as pre-game field access and the chance to visit members-only lounges on the stadium’s Club Level.

Following the success of a fan pavilion opened in the west end zone of the stadium last year, the Redskins will add another open-air Bud Light Party Pavilion and concourse in the east end zone. The space will open three hours before kickoff and feature a 90-foot bar, live bands, and outdoor suites.

FedExField is also set to add a new Chicken Guy restaurant, which will mark the chain’s third location and its first outside of Florida. Fans will be able to choose from 22 sauces at the restaurant.

“This is all based on feedback from our fans,” said Chris Bloyer, the Redskins’ senior vice president of stadium operations and guest experience. “We listen to our fans. We ask them what they want. We take their feedback seriously, and we try to deliver on what they ask for.”

The team will also offer a cocktail called Burgundy Crush, which is similar to a sangria. Additionally, Paisano’s will deliver pizza to fans seated on the main concourse during games.

“We hear a lot that we need fun food,” Bloyer said. “It’s a football game. Let’s have fun food.”