Want to know where to go to hear some good jazz any night of the week? Pierce can tell you the spots, broken down by night and who is performing. Appearing in the HOB hit “Treme,” Pierce’s trombonist character Antoine Batiste goes to a number of the lesser known bars and venues that are as New Orleans as Preservation Hall.

“A lot of these were undiscovered places,” Pierce said during a recent telephone interview. “The show was giving them exposure.” 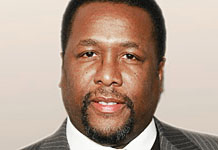 assembly venues have on the lives of attendees.

“These are very unique experiences and reflects the importance of culture in our society,” he said. “I can remember some of my earliest experiences going to theaters, just really getting into it and taking it in. It is a very seminal experience that helps shape us and who we become.”

It is that experience that Pierce will share during his keynote presentation, along with the new and exciting things happening in his home town.

Pierce is doing his part to lift the city that almost eight years later is still recovering in many ways from the devastation of Hurricane Katrina. One such endeavor is the launch of Sterling Farms, a chain of grocery and convenience stores in the food desert locations where fresh and healthy food is not readily available but also difficult for people without transportation to reach. The stores offer rides home for those spending more than $50.

“It was very important to me to open these stores and make healthy food choices accessible to those who cannot readily have it,” said Pierce. “There is still so much to be done in the community, but this was something that was a priority.”