The Wisconsin Center District (WCD) Governance Committee has unanimously approved a resolution to finance the $420 million convention center expansion project. This is the final approval needed in order to begin the planning phase of the project, which will be led by CAA ICON as the owner’s representative, the architecture firms tvsdesign and EUA and the construction team of Gilbane and C.D. Smith. An anticipated ground-breaking date will be in late 2021, and the new building is expected to open in early 2024.

This project will support at least 2,000 full-time equivalent jobs and $100 million in on- and off-site construction wages during construction. Additionally, the plan includes an already-approved 31 percent minority-owned-business clause (25 percent minority, 5 percent women-owned, 1 percent disabled veteranowned), and 40 percent of on-site construction jobs will be dedicated to the Residents Preference Program for city and county resident-held positions. Once completed, the new convention center is projected to attract an additional 100,000 out-of-state visitors annually, stimulate at least $6.5 billion in total spending in the state over a 30-year period, and generate at least $150 million in incremental state income.

“The Wisconsin Center expansion has been years in the making, and today is an exciting day,” said Marty Brooks, president 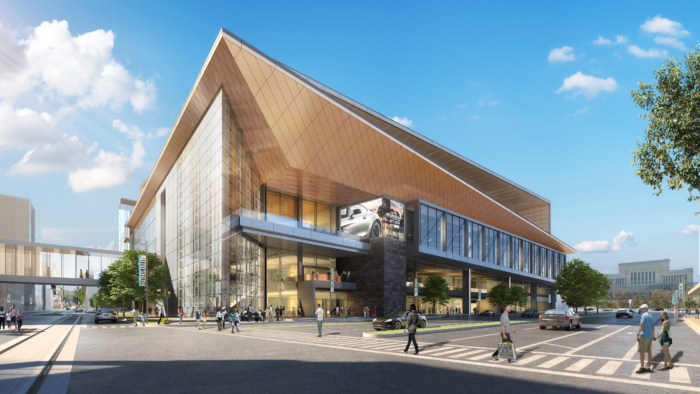 and CEO of the WCD. “Meetings and convention business acts as the economic foundation for hospitality and tourism in our region. I applaud the WCD Board and Governance Committee for the actions they have taken in the last two years and the trust they have placed in me and our team to lead the Wisconsin Center District toward Building More for the city we love.”

“When the Board authorized the expansion in April it was with the stipulation that final financing approval must come from the Governance Committee. The package which was approved today meets strategic financial goals including building the right facility to accommodate the WCD’s needs, and supporting the debt structure within the District’s restricted taxes. It also allows the WCD to construct a facility that will be an aesthetically compelling addition to the development and renaissance of Westown.”

By doubling the square footage of the convention center, the WCD will be able to host multiple, overlapping, and simultaneous events. The facility will emphasize flexible space arrangements which will meet the needs of meeting and event planners locally, nationally, and globally. Increased meeting and convention business will result in greater demand for downtown hotel room night usage, which will increase tax revenue and cause compression, driving visitors to neighboring communities. These visitors will patronize Milwaukee’s restaurants, bars and entertainment venues, boosting support industries.

“The WCD Board has invested countless hours over the last two years providing input and guidance on the expansion project,” said Jim Kanter, WCD Board Chairman. “From creating jobs to attracting visitors, this project sets our city up for immediate and future success. The WCD will serve as a sign of economic strength for the city of Milwaukee and join the rest of the development taking place west of the river. From ground-breaking to grand-opening, the expansion of the Wisconsin Center will be a real source of pride for all of Milwaukee.”

According to a study by third-party consulting firm, HVS, convention business will see 2019 booking numbers again in 2023, which means having a new facility open and available to book in 2024 will make Milwaukee an even more desirable destination.

“I am thankful for and applaud the WCD Governance Committee for approving the resolution today to support the bonds needed to build the Wisconsin Center expansion,” said Peggy Williams-Smith, president and CEO of VISIT Milwaukee. “This is an investment in the future of Milwaukee that is long overdue. We know that meetings and conventions will return, and we want to be assured that Milwaukee makes the short list when they do. We know that this is the time to set ourselves up for future success. Meeting planners are booking now for 2023 and beyond, and we want to position the Wisconsin Center as the newest and best convention space amongst our peer group.”

Additionally, the WCD is in the process of getting its Global Biorisk Advisory Council (GBAC) STAR accreditation, which is the cleaning industry’s only outbreak prevention response and recovery accreditation for facilities. GBAC-compliant features will be integrated into the building and include touchless designs, efficient HVAC systems, self-sanitizing escalator railings and more.

Sarah Maio is Vice President of Marketing and Communications for the Wisconsin Center District.