by R.V. Baugus
#mondaynightraw, #plexiglass, Ewwe
Comments are off

For years hockey has kept fans in a safe place from flying pucks and flying players over the rink through the use of plexiglass. Also gives those cross-checking hits a more violent thud of a player into the plexiglass and of course fans love to bang on the glass to heckle the opposition. 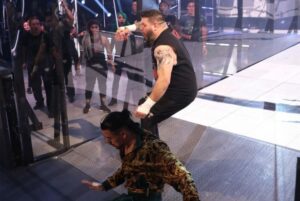 Entertainment’s (WWE) Monday Night Raw, which since the pandemic started and caused live events to shut down has still broadcast live from the company’s Performance Training Center in Orlando without fans.

Now, as you may suspect, professional wrestling has some of the most, um, vociferous fans there are. Everyone has their own favorite story about the elderly little grandmother seated in the first row berating the wrestling villain, right?

Well, eerie goes to another level watching a couple of guys grapple inside the squared circle with only a referee officiating the melee and no fans in the venue. You can literally hear the ref admonishing the wrestlers for those most illicit ring tactics as well as the trash-talking going on between the competitors.

That had been the norm for a few weeks until Monday night’s show had a handful of WWE’s “NXT” development wrestling stable present surrounding the ring behind barricades encircled by plexiglass. The same glass was on either side of the wrestlers’ entrance ramp as well.

Now, it appears that the plexiglass might be a solution for WWE going forward when fans are allowed to return ringside. If you watch any of WWE’s sports entertainment at all, you know that quite a bit of the action takes place outside the ring and around the ring perimeter. Heck, many a confrontation even goes up and down the aisles. If we are talking droplets of sweat and their impact upon COVID-19, it is easy to see wrestling as one of those places producing the most sweat, not to mention some occasional blood.

If in fact plexiglass is used in the future, it will serve in a powerful way to protect wrestlers and fans during entrances and matches.

As for the NXT wrestlers on hand, they stood in respective locations adhering for the most part to social distancing. Indeed, many a scenario needs to be worked out before arenas and stadiums resume sports and entertainment, but WWE might have found a solution that hockey has used for a long time.

By the way, ref, how can you possibly count to three when his foot was clearly on the rope?