by R.V. Baugus
#adinaerwin, #barclayscenter
Comments are off 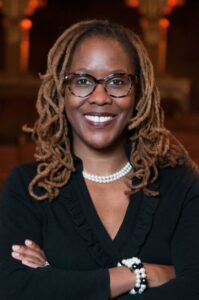 “We are thrilled to welcome five top executives into our business operations,” BSE Global CEO John Abbamondi said in a statement. “The executives are accomplished leaders in their respective fields, and their incredibly deep expertise will be instrumental as we prepare for an NBA season like no other. I am extremely excited and look forward to working with them to take our fan experience to the next level.”

Prior to TD Garden, Erwin spent 15 years at The Fox Theatre in Atlanta where she held various roles including Vice President and General Manager, and ultimately, Chief Operating Officer.

Erwin has also held various management roles at TIAA Bank Field, American Airlines Center, Vystar Veterans Memorial Coliseum, and the Times Union Center for the Performing Arts. She has received numerous accolades including VenuesNow’s Women of Influence Award, the Women Who Mean Business Award by the Atlanta Business Chronicle, and the Ray Ward Award for extraordinary contributions to IAVM’s Venue Management School, as well as serving as the chair of the Board of Trustees for the IAVM Foundation.

“Adina is one of the most respected venue operators in the sports and entertainment industry and we are thrilled to have her as part of the ASM family” said Bob Newman, Chairman, ASM Global. “She’s a talented leader and we are very fortunate to be able to leverage her wealth of expertise as we plan for a new NBA season at Barclays Center and look forward to a robust entertainment season sometime soon.”