In his new role Clayton will lead the strategy, program planning, and execution for diversity and 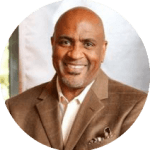 The Cavaliers have a long-standing respect and appreciation for diversity and inclusion. The team is proud to have one of the highest minority full staff percentages across all major league sports, as well as ranking in the NBA’s top five franchises for women and women of color at the Vice President level and above. Additional efforts were recognized in 2018 when the team was awarded the “Best-in-Class Award” for Senior Management Diversity by the Greater Cleveland Partnership (GCP).

Clayton earned his Bachelor of Arts in business administration and psychology from Wilmington College (Ohio). He has four daughters, a granddaughter and a grandson.

Corey James will also step into a new role as Senior Manager of Community Engagement and Foundation Development. He begins his 12th year with the Cavaliers organization in this new position after spending the last five seasons as the Senior Manager of Partnership Marketing. James originally joined the Cleveland Cavaliers as a Ticket Sales Account Executive in June 2007. 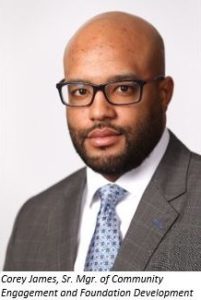 James’ heavy involvement and leadership with the Cavaliers annual Black Heritage Celebration and the Marcus Graham Project, an organization whose mission is to create opportunities for diverse individuals in the fields of media, marketing and advertising, has helped inspire and lead him into this new role, where he will continue to use his passion for engaging underrepresented groups.

James is a graduate of The Ohio State University. He currently serves on the board of ­the Ohio State Alumni Association and Associate Board of the Greater Cleveland Sports Commission. He is also active with Black Sports Professionals (BSP), The Real Black Friday and is a member of Kaleidoscope Magazine’s 40/40 Club.

“The Cavaliers understand that strong and focused diversity and inclusion efforts are critical for success and we are going to take our existing internal and external engagement to an even more dynamic level,” said Cavaliers and Quicken Loans Arena CEO Len Komoroski. “We welcome Kevin and Corey into their new roles as we continue to increase our business-wide support and programming with respect to this very important and impactful area of our organizational culture.”