In Her Own Words: Rose Mary Ward Shares About Her Beloved Husband, Ray

February 7, 2019 would have marked the 60th wedding anniversary of Ray and Rose Mary Ward. The milestone was not lost on Rose Mary, who had many memories to share during a phone interview about her beloved husband, Ray, who passed away on May 2. It is too easy to toss around words like legend, icon, and giant, but Ray Ward was truly all of those and so much more to an industry he loved and to hundreds of people he groomed and mentored to likewise excel in the profession of public assembly venue management. In her own words, Rose Mary reveals so much about her husband in his prime as well as some poignant reflections as he was moved to a memory care facility in June 2017 to gallantly fight Alzheimer’s and congestive heart failure.

On Ray’s impact on people:

He didn’t talk much about mentoring. He would tell me about these special people and their qualities and how he admired them, but he didn’t talk about 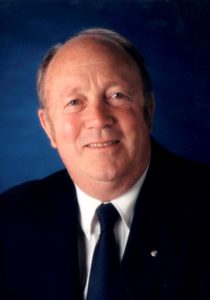 how he helped anybody. I knew he did, though, because I would run into people at a conference or something and there would always be a group of people in a room that came up to him and I just sat back and kind of watched. He loved the IAVM. He truly, truly loved it. He loved seeing it grow from when he went in and how much it had changed. It was amazing.

Everyone gravitated toward Ray. Even our sons’ friends would call him in the middle of the night, not their own father. Jonathan is our oldest, and then Stephen is the middle, and Daniel is the youngest. They all relied on their dad.

On Ray as a lifelong learner:

He was always reading and always learning. He remembered everything. He was always educating himself. There is always something you can learn. One of his sayings was that when your mouth is moving, you’re not learning anything. That was aimed at me!

On the passing of Ray’s close friend Bill Cunningham, who deceased on May 8 and was responsible for hiring Ward at the Oakland-Alameda County Coliseum:

Bill was the one that hired Ray when the Coliseum was just a hole in the ground. Those two were very close and had the same values with family so important. Bill had done a number of things so that Ray could coach the boys’ teams and stuff where he would come home to coach the team and then go back to work the Coliseum at night. He passed away just a week after Ray. Both of them always talked about the Coliseum and the different people in there.

On the disease that took over her husband:

Ray had Alzheimer’s and congestive heart failure. With Ray it was like with my mother. You lose a little by little. The man that died was not Ray. It was, but it wasn’t. He would hate what had haopened to him. It was like a relief. He wasn’t suffering any more. I have that I can look at and smile and say, you’re happy now. You’re not suffering. I do have the boys, my three boys, and they’re just wonderful.

It’s like a part of you. Every day you seem them going a little bit more. The disease took over his brain. You know, though, he remembered so many things about the Coliseum. How many years ago was that? He could remember all that. I was sharing with Brad (Mayne, IAVM president and CEO) how in the home Ray wasn’t about to do any of their little arts and crafts or little exercise groups.

I got him a big tablet and pen and pencil. He would watch and make lots of notes. He got so he wrote so little and tiny that you could barely read it. He would say, I’m telling you people you’re very inefficient at what you do. He was making all kinds of notes of how this place could be a real money make. Then the other thing he would do … they would call me in the middle of the night and I told them to quit doing that, but they would call me. He knew how to set off all their alarms. He would watch them setting things and stuff and then he would hide in a little alcove and watch them run down and turn them off and after walking back they’d see him and they’re laughing.

I said, I’m sorry. I started laughing, but you have to see the humor in this. I told them he is absolutely bored. You have to find jobs. He likes solving problems and he he likes working. He doesn’t know recreation and how to deal with that. He was the only one they called Mr. Ward or sir. Everybody else was by their first name. They knew he was not used to taking orders. He was used to giving orders. They would always ask him what do you think we should do today, or how should we handle this? They might make a suggestion and he might follow their suggestion. They did not tell him what to do.

I said, this is the real Ray Ward. At the end hospice came down. The nurse from the memory care had called them. He would go on plateaus but all of a sudden he just took a nosedive. I talked to the hospice doctor and he said that 99% of the time I can’t say absolutely for sure, but when it happens this quickly then it is that they usually have had a stroke. In a matter of about three weeks he went from me going in and I would get one of their soft ballsand would throw it to him. My son was there one time and he said, boy, he remembers exactly how to catch that ball and how you bat it back. He did not miss. He went from being like that to I would take a spoonful of something and put it in his mouth and asked if he could eat it. He would just keep his mouth open. He just stared and couldn’t even eat.

I got a phone call at 6 in the morning. They said they found him and he had died. I said I would be there as soon as I can. I took care of a few things and made a couple of phone calls. I went down there and went straight to him. I didn’t see anybody else. I looked at him and he was so peaceful looking. His face was always kind of scrunched up and he had a lot of pain from the heart disease. There was like a little smile. His mouth was open but it sort of turned up. I went down to the nurse and she said his hands were crossed across his chest. He looked to her like he was smiling. They closed his mouth and said his whole face was so relaxed and so peaceful. She said he just went in his sleep like that. That’s how I want to go.

On plans to honor her husband:

When my younger sister passed away, we had at my niece’s a little family get-together, memorial. That was about four years ago. On the way home, Ray said, That’s what I want. I don’t want any big-to-do thing. I just want the family or those real close. Just do it at the home. I am going to respect his wishes and that’s what I’m doing. It’s going to be in June. Just kind of a family thing. We are going to do an Irish wake and tell stories about dad, and uncle Ray. He was very important in the family, like the Godfather. It will be a happy time.
We were 20 years in Granite Bay, just outside of Sacramento. I just moved further up the mountain here. I checked with the boys and two of them said he told him the same thing. It was his wish.

About the Author
R.V. Baugus is senior editor of IAVM's magazine, Venue Professional. Baugus is a 12-time Quill Award winner from the Dallas chapter of the International Association of Business Communicators (IABC) and Silver Quill recipient from the Southern Region of IABC. He is devoted in his community by serving as a deacon at his church, a facilitator leading a Grief Share class, high school football public address announcer for the Irving ISD and basketball PA announcer for Nimitz High School.
Social Share
4 Comments