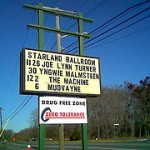 As the 2013 hurricane season begins, one venue in Sayreville, New Jersey, is reopening seven months after its near destruction at the hands of Superstorm Sandy.

The Starland Ballroom has completed extensive repairs and renovations and begins selling tickets on June 7 in advance of a scheduled September re-open. Country star Billy Currington performs on September 7 in a much-anticipated return to music for the entire community.

“The months following Superstorm Sandy have been challenging here in New Jersey,” said Colin Conway, vice president, AEG Live – Eastern Region and general manager of Starland Ballroom. “Like many of our neighbors and area businesses, we sustained significant damage but we are determined to persevere. We’ve looked forward to the announcement letting the public know we’re back. We have a few more months of renovations remaining, but we’re now positioned to announce these shows and triumphantly announce Starland’s return.”

Sayreville’s Starland Ballroom is located near tributaries fed by both the South and Raritan rivers. Rain and sea surge from Sandy sent more than 6 feet of water into the venue, damaging or destroying its entire electrical and sound systems; interior walls and bars; wooden platform flooring; and plumbing facilities. More than 50 concert events were canceled or moved to other venues – effectively crushing what was looking to become the venue’s biggest year.

“This is the new normal. We’re prepared in the event this happens again.”

Notwithstanding, AEG Live officials were onsite within days of the storm, deciding swiftly to begin rebuilding the facility as soon as possible.

“The Starland Ballroom is one of AEG Live’s most successful venues,” said Conway. “There was never a doubt that the company and Starland’s dedicated staff would pull together and bring the venue back to life. This was also an opportunity for us to make improvements to the venue, for artists and fans alike. Starland will once again be the state’s number one club concert facility.”

Amongst these improvements: an additional platform level in the rear of the main ballroom; upgraded, state-of-the-art sound and light technologies; and adjustments throughout the facility to improve crowd flow and sightlines. The venue’s backstage and dressing room areas also received an overhaul, while the building as a whole was reconstructed to address future storm or water issues. Nearly two dozen contractors are involved in Starland’s renovation process – mostly New Jersey residents and companies who experienced Superstorm Sandy firsthand.

“Governor Christie has said so himself,” Conway added. “This is the new normal. We’re prepared in the event this happens again. The Starland Ballroom has been rebuilt  to mitigate damage and reduce downtime during any future storms, and we were able to achieve this goal by employing some of the best engineering, architectural, interior design and industrial services firms from right here in New Jersey.”