Barlage replaces former CEO, Len Komoroski, who stepped away from his role following the conclusion of the Cavs’ 2021-22 season following 19 years of leadership with the organization. 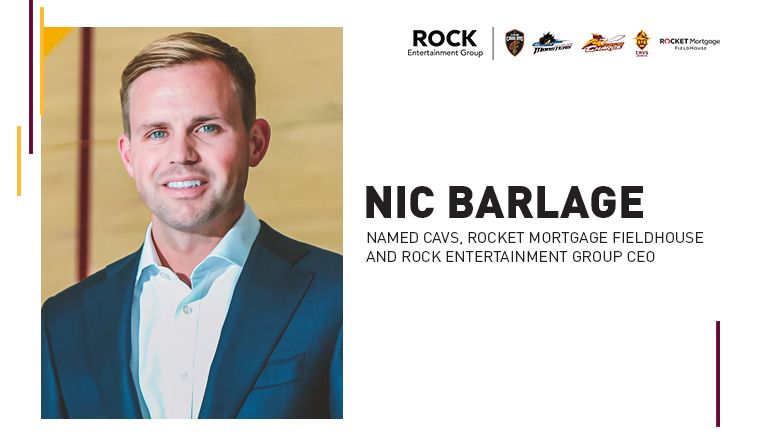 created and support an inspiring culture that embraces innovation, imagination, curiosity, the value of people, and decision making always focused on doing the right thing. Collectively, we can make the greatest impact possible within the communities that we serve,” Barlage said. “It is an absolute honor and privilege to have the opportunity to lead the business operations for a dynamic organization that shares such a special bond with our community and partners. We look forward to an exciting future and building on the strong foundation that Len Komoroski and all of our hard-working team members, past and present, helped establish. We will continue to strive for outcomes that make our team, fans, and partners proud.”

“We are excited to elevate Nic to CEO and for him to lead the Cavaliers business operation and our great team of people across our organization,” said Cavaliers Chairman Dan Gilbert. “The Cavaliers are in excellent position for high-level success both on and off the court. This is in large part due to the caliber of people like Nic that are leading, collaborating, and growing our relationships and business across every aspect of Rock Entertainment Group and the Cavs organization. Nic is both an exceptional, community-minded leader, and a great teammate. For several years now, he has been at the core of decision-making, innovation and growth for the Cavaliers and Rocket Mortgage FieldHouse and we are very pleased to have him at the helm of our business operations group while we all look forward to continuing the great momentum that has been established.”

Barlage rejoined the Cavaliers in 2017 as President of Business Operations and was named COO for Rock Entertainment Group when that entity was established in 2021. He was previously part of the organization for five seasons starting in 2008 and continuing through 2014 when, as the Vice President of Sales and Service, he departed to join the NBA’s Phoenix Suns for three seasons as their Senior Vice President and Chief Sales Officer.

Rock Entertainment Group is the umbrella entity of the teams and venues that are part of Cleveland Cavaliers Chairman Dan Gilbert’s Rock Family of Companies. It includes the NBA Cavaliers, the AHL Cleveland Monsters, the NBA G League Cleveland Charge and Cavs Legion of the NBA 2K League; and the operation of Rocket Mortgage FieldHouse in Cleveland, Legion Lair Lit by TCP home of Cavs Legion in Cleveland and Cleveland Clinic Courts – the Cavaliers’ training and development center in Independence, Ohio.