Michael and Katherine Diegan, of Daphne, Alabama, were attendees at the “New Orleans Blastoff” volleyball 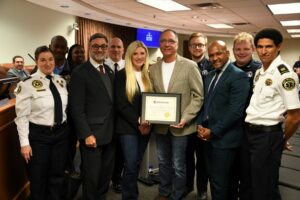 tournament on the weekend of January 14th. On Saturday, they encountered an individual who had been jogging in the Pedestrian Park, experiencing a medical emergency. Quickly ascertaining that the man, named Jason Baldwin, was not breathing and was without a pulse, they immediately rendered aid. Mr. Diegan administered CPR, while Mrs. Diegan located and retrieved a nearby AED unit. Mr. Diegan then successfully used the equipment to revive Mr. Baldwin, who resumed breathing and began to speak shortly thereafter.

Convention Center staff and Paramedic Ryan Satterberg rendered additional aid, helping to care for the man until the arrival of a New Orleans Emergency Medical Services (NOEMS) unit, which stabilized Mr. Baldwin and transported him for treatment at Tulane Medical Center.

“I have been a runner for over a decade, I have run more than 10,000 miles in my life and on any one of those 10,000 miles, this could have happened. I am blessed to have [Michael and Katherine] there when it did.” said Baldwin, speaking virtually at the Exhibition Hall Authority’s monthly board meeting. “I am hoping that folks are encouraged to get CPR certified, understand what an AED is, or simply just check up on their health.”

“Michael and Katherine Diegan saved a man’s life, and we are pleased that the Authority is formally recognizing their heroism today,” said Jerry Reyes, President and Chairman of the Ernest N. Morial New Orleans Exhibition Hall Authority. “When the Convention Center deployed the AEDs throughout the Convention Center in 2020, we hoped never to need them — but we are deeply grateful to have this technology available in moments of need such as this.”

“On this particular day, we had more than 13,000 individuals in our facility. It is our responsibility to ensure the safety of our guests, both internal and external. In this case, being prepared made all the difference,” said Michael J. Sawaya, Convention Center President. “We could not be more inspired and proud of everyone involved in this incident.”

Also in attendance at the Authority’s regularly scheduled board meeting were representatives of NOEMS who responded to the scene and transported Mr. Baldwin to Tulane Medical Center.

The Australian Convention Centre Group (ACCG), comprising representatives from the nation’s leading convention and exhibition centres, have passed a resolution to support the amalgamation of relevant industry associations in the interest of the broader event sector.

Business events play an enormous role in Australia’s economy, contributing more than $36 billion nationally in the year prior to COVID-19. But beyond the immediate economic benefits, business events catalyse change and leave lasting legacies, through knowledge exchange, communication of research, and subsequent investment in innovation.

Currently, the industry voice is splintered across multiple associations, which can at times make it challenging to advocate the sector’s value.

Advocating for the change, members of the ACCG argued and agree that the business events sector would benefit enormously from a single, amalgamated peak body to support growth and industry development.

ASM Global, the management group for Pinnacle Bank Arena, has named Tim Savona as the new general manager of the arena and Pinewood Bowl. Savona succeeds Tom Lorenz, who died on Oct. 1, 2022. Lorenz held the position from the arena’s opening in 2013 to his passing.

Savona, who is currently the general manager of the Tysons Event Center and Orpheum Theater in Sioux City, 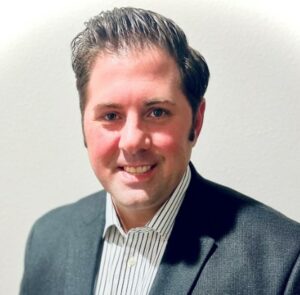 Iowa, will begin his new position on Feb. 13. “I am thrilled to be leading the team at Pinnacle Bank Arena and Pinewood Bowl Theater. This next-step opportunity in joining ASM Global will allow me to work closely with our clients at the City of Lincoln and University of Nebraska-Lincoln,” Savona said.

In Sioux City, Savona was an employee of OVG360, formerly Spectra, which took over booking, marketing, staffing, and food and beverage service at the Tyson Center, a 10,000-seat venue owned and run by the city since it opened in 2003.

The city of Lincoln owns Pinnacle Bank Arena, a 15,000-seat venue that is home to Husker basketball games, state high school volleyball and basketball tournaments and a dozen or more concerts each year.

Wake Forest University has partnered with ASM Global which has assumed the management and operation of Lawrence Joel Veterans Memorial Coliseum.

“ASM’s best-in-class arena and event management expertise is already helping us advance on our goal of providing the best fan experience in North Carolina,” said Wake Forest Director of Athletics John Currie. “We are confident that their entertainment industry connections and reputation will help expand both the quantity and variety of concerts and special events to better serve the citizens of Winston-Salem and Forsyth County while attracting visitors from all over the region and country.” 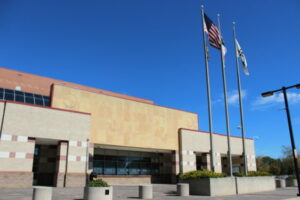 unparalleled ability to also think locally is on full display at Wake Forest. Dramatically elevating the customer experience at venues and simultaneously offering new cutting-edge techniques to increase revenues continues to be of prime importance for ASM Global.”

ASM Global’s Wake Forest team is led by General Manager Brandon Berry, who since arriving in Winston-Salem last fall has actively engaged with University, city and county officials, as well as Greater Winston-Salem, Inc. and Visit Winston-Salem to build strong synergy to position Winston-Salem as a great destination for fans and events alike.

Berry assumed the role of General Manager at LJVM Coliseum in September. He has been actively involved in managing, booking, and operating venues for over 20 years. Before moving with his family to Winston-Salem, he spent the past 15 years working as a general manager in venues in Miami, Atlanta, and Boston.

Wake Forest will sunset the formal booking collaboration with Greensboro Coliseum, which has been in place since Wake Forest University purchased LJVM Coliseum from the City of Winston-Salem in 2013.

“We appreciate our long-time partners at the Greensboro Coliseum, which has helped bring many memorable events to Winston-Salem,” Currie said. “Boosting the Triad will continue to be a top collaborative priority for all of us.”

In addition to the excitement of Wake Forest’s men’s and women’s basketball teams competing in the elite Atlantic Coast Conference, upcoming LJVM Coliseum events include the nearly sold-out Billy Strings concerts on March 3-4, the return of the Harlem Globetrotters on April 15, and Hot Wheels Monster Trucks Live on April 29-30.

ASM Global’s staff at LJVM Coliseum currently includes seven employees, five of whom were local to the Triad. At least two additional full-time positions will be added this year.

iCommit, IAVM’s annual member referral campaign, ran this year from July 1 – December 31, 2022. The goal of the campaign is for each existing member to recruit one or more individuals to join our community of venue professionals. The results are in!

We are pleased to report that 123 members were entered into the raffle to win prizes for every new member that joined. With these individuals’ support, we have added 336 new members to IAVM!

Congratulations to the winners. We appreciate our members for continuing to advocate on behalf of IAVM. Special thanks to Ungerboeck for their continued support and sponsorship of this membership initiative. If you have any questions, contact IAVM’s Director of Membership, Gina Brydson.