by Lauren Kubicki
podcast, tech certification
Comments are off

IAVM’s Greg Wolfe, Professional Development Manager, sat down with Joe Aldridge, Entertainment Engineering and Design Coordinator at the University of Nevada, Las Vegas – College of Fine Arts, to discuss technician and electrician certification programs available and to preview his Performing Arts Managers Conference session. In this podcast, Aldridge discusses how technician certification programs are helping improve safety at venues and the process to achieve certification. Aldridge also touches on the following:

If you would like to learn more, be sure to attend Aldridge’s session at PAMC 2013, What does the Entertainment Technician Certification Program (ETCP) mean for you and me?, on Sunday, February 10 at 2 p.m. 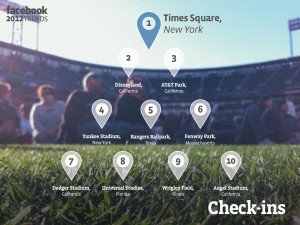 This is the question discussed on Mashable.com, after Facebook Stories recently revealed a new stat: 7 of the 10 top check-ins in 2012 were at Baseball Stadiums. This coincides with another report from VenueSeen showing a 400% jump in Instagram photos taken at ballparks in the past year (compared to 2011). Frequency of games and other events happening in these venues contribute to the stats, but the underlying force that the IAVM community should consider is the deeper role social media is playing for your attendees: social proof.

END_OF_DOCUMENT_TOKEN_TO_BE_REPLACED

by Jason Judy
CFE, leadership, school, SES
Comments are off

Are you a chief organizer, a risk-taker and a collaborator? Do you prioritize and strategize? These are all traits of great leaders. In 2009, U.S. companies spent $12 billion on leadership development. Last year 44% of companies expected to increase total spending on leadership development and executive education. According to Deloitte’s research 56% of company leaders say they will soon face a shortage of qualified executive talent.

END_OF_DOCUMENT_TOKEN_TO_BE_REPLACED

The tragedy this past weekend at Brazil’s Kiss nightclub is just one incident in a history of nightclub disasters spanning back as far as the 1920s. In the past 13 years there have been a string of 10 notable nightclub fires around the world; from a December 2000 blaze in a dance hall in Luoyang, China which killed 309 people, to the 2003 Rhode Island Station nightclub fire that killed 194; and most recently the Kiss nightclub fire in Brazil which killed over 200.

According to the National Fire Protection Association (NFPA), there were almost 5,000 venue fires from 2000 to 2004, with an average of one death and 52 injuries per incident. While most venue managers understand how to prepare and hopefully prevent the injury and risks associated with crowds, dark interiors, staging, and pyrotechnics – these tragedies must be acknowledged, examined, and where possible, steps must be taken to avoid future incidents.

END_OF_DOCUMENT_TOKEN_TO_BE_REPLACED

by Vicki Hawarden, CMP
Florida, VenueConnect
Comments are off

We have so many new and exciting things in store for VenueConnect 2012, July 21 – 24 in Fort Lauderdale, Florida! This is my first annual conference as President and CEO of IAVM; myself, John Bolton, VenueConnect Chair, the programming committee and IAVM staff have been hard at work creating a VenueConnect like no other before.

The vast variety of educational content and the brand new register two professionals and get the third for 50% off deal, make it easier than ever to bring your entire team!
END_OF_DOCUMENT_TOKEN_TO_BE_REPLACED