The first full day of VenueConnect started on an upbeat note as three major awards were presented to three deserving individuals as recipients of the IAVM Foundation Legacy Award, Charles A. McElravy Award, and Joseph J. Anzivino Distinguished Allied Award. In addition to that celebration, those honored as in the 30 Under 30 were also recognized.

Steve Peters, CVE, was named recipient of the Legacy Award for his efforts and contributions 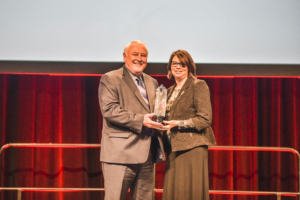 over the years in relationship to the IAVM Foundation. Peters was acknowledged for his leadership and as one of the early advocates of diversity and inclusion. 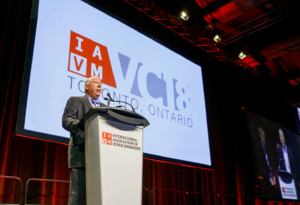 Jack Hagler, ASTC, received the Anzivino Award as a true friend to the performing arts community dating to the 1990s. Hagler even took time to credit the bankruptcy of a past employer with placing him in a theater consulting role that he has come to love and cherish and given back so much to. Hagler thanked everyone in his comments, something noted by IAVM Chair Doug Booher, CVE, who called it “quintessential” Hagler to shower praise on others even as he is being honored.

Robyn Williams, CVE, received the association’s most prestigious award when she was selected to 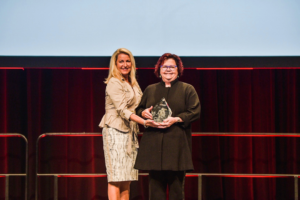 receive the Charles A. McElravy Award. In a distinguished career in which she has accomplished about all there is, Williams called her most recent work with the Diversity & Inclusive Leadership Committee her most “important” to date.

“It is deeply personal for me,” she said. “When I look around like in this crowd, I see diversity in a room, but not in leadership roles. This seemed really wrong to me.”

To that end, Williams asked the audience to hold her accountable as she continues to promote diversity and inclusive leadership, and thanked her colleagues on the committee for their passion.