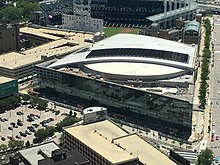 Antony Bonavita, CVE, has been promoted to Executive Vice President, Venue Operations. In addition to overseeing all venue operations under the Cavaliers organizational umbrella, Bonavita has also played a leading role in the two-year renovation and construction process as part of the massive transformation of Rocket Mortgage FieldHouse. He oversees the Facility Operations Team responsible for the successful programming, maintenance and daily operations of Rocket Mortgage FieldHouse and the Cavaliers’ team training center, Cleveland Clinic Courts, as well as the organization’s facility operations interest in Canton, home of the team’s G-League affiliate Canton Charge, and additional warehouse facilities in suburban Cleveland. Bonavita also oversees all event booking efforts with the focus of maintaining Rocket Mortgage FieldHouse’s status as one of the busiest venues in the world.

Eric Clouse has been promoted to Senior Vice President, Sales and Service. Clouse leads all ticket-related strategy development, sales and service areas for the Cavaliers and Rocket Mortgage FieldHouse including groups, individual tickets and the team’s season ticket-based, year-round Wine & Gold United membership club. In addition, he leads all suite and premium seating sales and service efforts, including a principal role in the design and build-out of the numerous reimagined public and private hospitality spaces for the venue’s massive transformation project. Clouse also leads suite and premium seating sales and service for all concerts and special events at the Rocket Mortgage FieldHouse.

Jock Callander has been promoted to Vice President, Hockey Affairs and Team Services for the Cleveland Monsters. Callander will enter his 13th season with the Monsters AHL franchise as a key driver of the team’s hockey and business operations. He has been at the core of managing the Monsters affiliate partnership with the NHL’s Columbus Blue Jackets, and has also been at the forefront of the team’s community relations and youth initiatives, in addition to leading the Monster’s team services area.