by Paul Murphy
Convention Centers, snow, weather
Comments are off 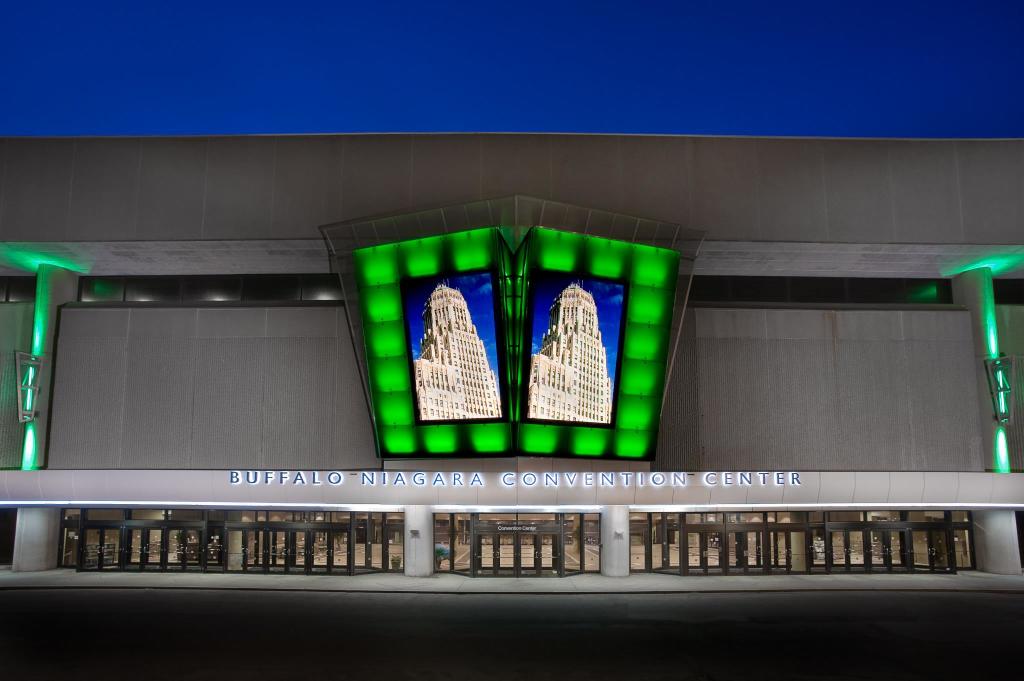 The unprecedented lake effect snow storm that has gripped large parts of Western New York and Buffalo has had little impact on the Buffalo Niagara Convention Center so far. Until today, the facility was open and operational. We have had three local events cancel that have already rescheduled for December.

The storm named the “Winter Storm Knife” or “Snow-Vember” by the local media had been limited until yesterday to a area about 12 miles wide x 20 miles long, literally one to two miles south of downtown and our location. This area includes South Buffalo, first ring suburbs, and the south towns as we call them, including Orchard Park—home of Ralph Wilson Stadium, which is buried under +200,000 tons of snow. The south towns area of Buffalo is traditionally the snow belt and the location of major ski resort areas.

As you may have seen in the media, the conditions are dangerous, the snow amounts historic, and the concern for the safety of residents are at the forefront of clean-up efforts. We have a number of staff that have not been at work since Monday and will likely remain out for the week. The event cancelations earlier in the week have allowed for us to reduce part-time staffing in some areas. Late yesterday and overnight, the storm did move to the north and into the city of Buffalo, and we went from a dusting of snow to a little less then 12 inches, which for us is very manageable. Because we had no scheduled events—and with all city and county of Erie facilities being closed today to allow for clean up of streets and roads—the building is also closed.

There are contingency plans that call for the convention center to be used as a emergency shelter and for the use of our kitchen facility as a commissary as needed. Those plans have not been enacted, and, as previously stated, there has been little impact on the downtown area.

We do have a large black tie gala event (1,000 guests) on Saturday evening, which at this point is still scheduled to take place, and the week of Thanksgiving is by far one of our busiest weeks of the year. We host two large annual local events—The Turkey Trot Post Race Party (14,000 people) and The World’s Largest Disco (7,000 guests). At this point, we are making contingency plans, adjusting personnel schedules and orders for food product for the Saturday night’s gala banquet. There is some concern about the ability of trucks to make deliveries today, and some vendors are simply not open or unable to fulfill requests. With some luck, use of alternative sources, and flexibility among our staff and clients, we should be all set to move forward with this event tomorrow and Friday.

The events next week are already falling behind on the set-up and move-in schedule due to difficulties of trucks delivering production equipment into the Western New York area with all of the major routes in and out of Buffalo being closed for the last three days. This will make for a more compressed schedule next week and possible overtime staffing as needed.

In Buffalo, we tend to not let snow or winter weather interrupt our daily lives. In fact, we have have the experience, resources, and expertise to deal with just about any winter storm safely and efficiently. This storm is certainly a challenge and there is great concern for residents in the areas hardest hit by the storm. We will get past this. The Buffalo Niagara Convention Center is prepared to support the clean-up efforts as needed and accommodate our schedule of events.

About the Author
Paul Murphy is the facility director of the Buffalo Niagara Convention Center.
Social Share