When Jeff Davis, CVP, CMP, director/general manager of the state-of-the-art College Park Center arena on the campus of the University of Texas at Arlington (UTA), began a tour of the venue last Friday for IAVM staff, the first thing that raced through my mind was, “Hey, this ain’t no Texas Hall!”

Granted, that’s no way for a guy who earned a Bachelor of Arts in Communication with a journalism emphasis from UTA to represent his alma mater, but, as they say, it is what it is.

College Park Center arrived on the Arlington scene in February 2012, an opening bumped up three months from the original planned debut as decreed by former university President James Spaniolo. The February 1, 2012 opening of the 7,000-seat arena saw a doubleheader basketball game featuring both the UTA men and women taking the court.

“This was 40 years in the making,” Davis told IAVM staff. “The original opening date was May of 2012, but the president wanted to have a basketball doubleheader game and get the building opened rather than with some May graduations.”

The facility now hosts UTA volleyball as well as the WNBA Dallas Wings in addition to the Maverick basketball teams. The multi-purpose venue also hosts concerts and celebrated a Drake show that sold out in 13 minutes to launch its concert calendar in 2012. In all, College Park Center played host to 22 events in those first 30 days.

Davis was joined by Keith Schobert, assistant director, building operations, and Katie Gent, assistant director, guest experience and front of house operations, in walking the staff through every part of the venue. At each stop, one of the three discussed various aspects of the arena, including such subtle nuances as the design of the visiting team locker room (you will need to ask Davis about that strategy!). 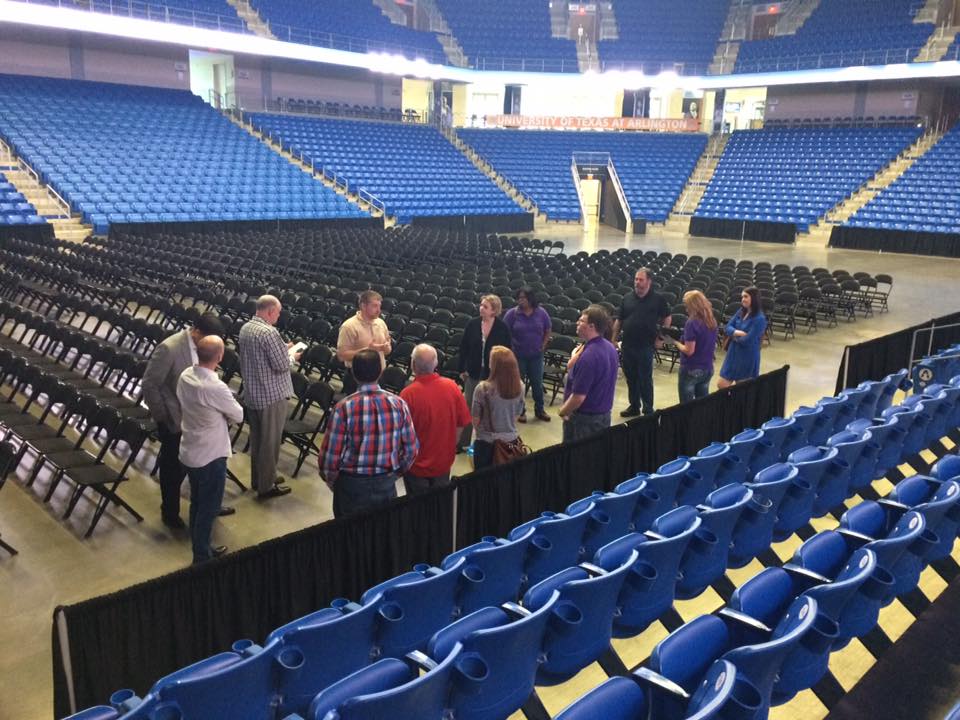 “The vision for College Park Center became a catalyst for the development in downtown Arlington,” Davis said. “The original designs for the facility actually started in 2005 and is a partnership between the university, the City of Arlington, and the First Baptist Church of Arlington.”

College Park Center is a $78 million project designed by Dallas-based HKS, Inc., and part of the $160 million development known as the College Park District, located to the east of the main campus and spanning more than 20 acres with a wide variety of retail and restaurant offerings.

Davis noted that there is no debt service on the building and that planned summer improvements will come from capital reserves. There are two practice courts that even have naming rights with Carrizo Court (Carrizo Oil & Gas) etched on the courts. Davis said that 18 high school graduations are on tap for May and June and that sports is now year-round with the WNBA franchise now in its second year in the Metroplex after relocating from Tulsa.

IAVM President/CEO Brad Mayne, CFE, thanked Davis and his team for taking time out of a busy afternoon to educate the staff on the inner workings of a venue. Mayne even returned to his venue management days in asking the staff if they understood some of the terminology that Davis and his team shared.

Oh, and about that Texas Hall thought that I had. It was the “basketball venue” that opened in 1965 and where the UTA Movin’ Mavs played back in the day when I was an undergraduate. Basketball venue is used loosely, because in reality there are not many around that really serve as a proscenium theater, which Texas Hall primarily continues as with concerts, lectures, meetings, theatre and dance. There was plenty of intimacy in the 2,625-seat space, but when players weren’t chasing loose balls off the court into a pit they were just as likely to find themselves pinned against the stage at one end.

Those were the days, but suffice to say that today’s recruits are more likely swayed to become a UTA Maverick after touring College Park Center and its amenities befitting a major college program. And with Davis and staff providing the stewardship for the venue, it will be a big-time player for years to come.